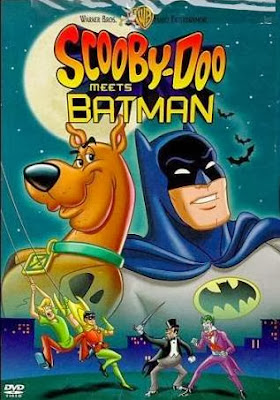 Protecting the innocent, thwarting injustice and stuffing themselves with Scooby snacks! That's right - the most legendary names in crime-fighting history join forces as Scooby-Doo and the Mystery, Inc. gang team up with Batman and Robin.

The action begins as The Joker and The Penguin try to cash in on a crooked counterfeiting scheme only to be foiled by the crime-fighting trio of Batman, Robin and Scooby-Doo! But The Joker and The Penguin return to try and steal a flying suit until Scooby-Doo and the gang prove that with a little help, they have what it takes to bring the sky-high scoundrels back to earth!

What we have here are two legendary sets of characters in the shape of the Scooby gang and Batman, along with his trusty sidekick Robin.

I've always  thought of the 1970's animated series of Batman and of Scooby-Doo have always been personal favorites of mine and think they really stand the test of time.  They may seem a little bit tame when compared to some of the television shows of today but I think that they're still a hell of a lot of fun.

This release here is two episodes featuring the Scooby-Doo regulars but also featuring The Joker, The Penguin, Batman and Robin too.  It's a bit of a strange cross over and shouldn't really work but it does.  The animated is quite dated but that said, the cartoons here are over 40 years old so of course it's going to look a bit dated.

That said, the stories themselves are actually quite fun.  The only thing that kind of bugged me was the fact that the laugh track would start to get annoying after a while but that's a tiny complaint really when you consider how much fun the DVD is.  I watched it with my little four year old son and he loved it.  He's a fan of both Scooby-Doo and of Batman so this release was like a treasure trove for him.

I'm not going to lie, this isn't going to knock your socks off or anything like that nor is it fast paced in that ADD style that seems so prevalent in today's cartoons but there is a lot of fun to be had watching it.  Besides, it's Scooby-Doo and Batman working together to stop The Joker and The Penguin.  What's not to love about that?