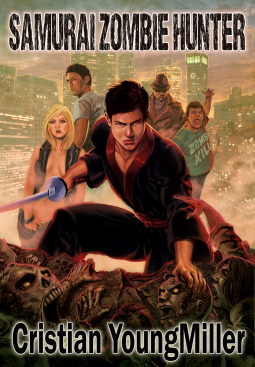 The extinction of humanity approaches…

Out of the jungles of South America stumbled an infected priest. 10 years later the zombie infection has seeped out of the shadows and gutters and has spread across the globe. Governments crumble as they decide who should live and who must die.

Out of this pre-apocalyptic world emerges Donavan Leeds, an ordinary man who dreams of becoming a Samurai. Paralyzed by loneliness after he is mysteriously abandoned by everyone he loves, Van wakes one warm night to find a figure holding a sword at the foot of his bed. Obligated by a profound debt, Van hires out his samurai sword and a river of zombie blood follows. To a desperate world, Van becomes a folk hero; to the secretly infected, he is ‘the beginning of a war’.

As humanity’s darkest forces gather on one side and the incurably diseased gather on the other, civilization is on the brink of its bloodiest war. And Van, blinded by love and a secret that could change the course of mankind, must decide who to kill to prevent the zombie apocalypse.

* This book is rated ‘WTF’ for its strong language, sexual situations and irreverent humor.

Before I start this review, I just wanted to say one thing.  I wasn't expecting to take this book seriously in the slightest.  I mean, come on, it's called 'Samurai Zombie Hunter' for Pete's sake.  However, there's not taking it seriously and then there's wondering how on Earth it not only got past the editors but how it got published at all.

The entire book felt like it was written by a young teen that would giggle every  time he made a character swear or mentioned something even remotely sex related.  I'm no prude in the slightest but it honestly felt like the writer was someone who maybe hadn't been allowed to ever swear in real life so he was using all the cuss words he knew as much as possible in the book.

Another thing that bugged me were the constantly bad spelling mistakes, characters names changing how they're spelt throughout the book and some really bad editing choices that really took me out of the story.  Well, what story there actually was.

The story itself had a couple of well written moments but the rest of the book and by the rest I mean about 80% of it honestly felt like little more than filler or like it had been written during a lunch break at work and sent to the publishers.  Characters would come, disappear for ages and then come back as if they'd been there all along.  Did anybody actually edit this before it was released?

All in all, I really struggled to finish it.  Bad editing, constant spelling mistakes, characters names changing how they are spelt and much more make this one that I really could have done without reading.  It takes a lot for me to want to put a book down without finishing it and this one came very close.  The only reason I kept on reading it was that I'd been told that the open ended finale would get me ramped up to see a possible sequel.  It didn't.  Just like the rest of the book, it fell flat.

The best way to describe this book is that a zombie would have more life and enthusiasm in it than this novel did and I use the word novel quite loosely there.

Posted by Pat Scattergood at 06:32