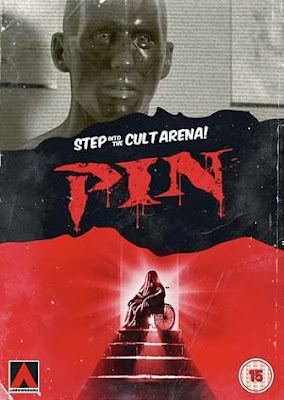 Pin, (short for Pinocchio), is an anatomical instruction dummy. Dr Linden (Terry O'Quinn) uses the dummy to explain difficult questions to his children, Leon and Ursula. When Dr Linden and his wife die suddenly, Leon projects a personality to Pin to replace his father. When Ursula starts hanging around with new boyfriend Stan, Leon and Pin take action!

The 1980's.  A decade of big hair and electronic music but also the decade of the quickly made slasher movies that filled the cinema's and rental shops of the era.  Some of these went on to be legendary such as 'A Nightmare on Elm Street' and many more but a lot of them have been largely forgotten.  Some of the forgotten ones were just awful but others were good quality horror movies that were sadly lost under the deluge of slasher movies that were pumped out.  PIN is one of those movies.

If you were to dismiss this as a mere horror movie would be doing it a massive disservice.  What we have here is a psychological horror that really shreds the nerves and keeps the viewer on edge for the entire movie.  A lot of that is in part to not only the seriously creepy medical dummy but in the beginning of the movie a lot of that creepy, filling of dread is down to the superb performance by the criminally under rated Terry O'Quinn.

That uneasy feeling of the movie continues when David Hewlett takes over and slowly but surely descends in to schizophrenia and madness.  Hewlett really does this part justice in that one minute you are feeling sorry for the character and just want to comfort him but then the very next minute, you think he is absolutely crazy and you want to run away from him as fast as you possibly can.

The rest of the cast is spot on and really play their parts well.  The best of these other actors is Bronwen  Mantel as Mrs. Linden.  She makes the character so cold and calculating that all through the movie, you are made aware of just what her creepy brand of OCD is doing to the family itself but in a subtle, non melodramatic way.

It's a bit of a shame that there is only a trailer for the special features but at the same time, PIN is a low budget horror movie from the 80's so I wasn't really expecting any.  I won't lie, it would have been nice to see some but when this movie is this good then that's a small complaint.

If you're expecting a bloodbath of a slasher movie then you are going to be disappointed.  This is a slow burning psychological horror with some amazingly subtle and chilling performances by the cast.  Hopefully the movie will shed it's forgotten status and be recognised for the well made and affecting movie that it is.

Posted by Pat Scattergood at 10:00