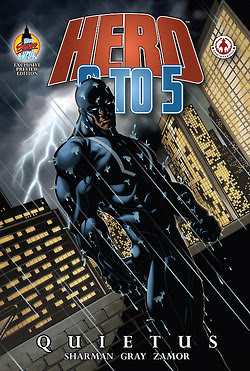 Welcome back to a world where the rich can afford the best in super hero protection, but the poor have to get by with the heroic equivalent of third party, fire and theft. The “Lone Knight” returns from the pages of Hero: 9 to 5, but how will The Loner and the finest men and women that publicly funded super hero protection can supply cope when a mysterious figure leaves a trail of unconnected corpses in his wake?

How will a young hero deal with the loss of his mentor? And, more importantly, how will Thunder Woman get her groceries when she runs into Lash Lady at the store? In a world where being a super hero is just another job, what happens when there’s nobody left alive to pay the bill? Quietus – some men just want to watch the world die.

One of the things that strikes me about superhero comics is that sometimes no matter how exciting the story is, it can sometimes drown in the ridiculous or the kitsch side of things.  That's lead to a hell of a lot of parodies and cynical, bitter storylines in comic books.

This manages to take a look at the ridiculous side of the superhero genre but also put forth an absolutely cracking and exciting story that really gripped me from start to finish.

While the first four issues of 'Hero 9 to 5' focused on the relationship between  Flame-O and Frostika, this storyline most definitely ramps it up a notch by focusing on a dark and quite cynical hero by the name of The Loner.  I would love to read a series just of his adventures because he seems like such a great character for the series.

Ian Sharman's writing here manages to be both look at the ridiculous moments in a superhero's life and yet craft an exciting and gripping story.  The  self referential nature of some of the dialogue really straddles the line between surreal and deadly serious at times yet is never boring.  In fact, the story reminded me a little bit of the way Joss Whedon writes his stories yet Sharman has a very distinct voice himself and that's evident here.

Art wise, the panels absolutely fly off of the page.  There are some absolutely superb moments of action and excitement drawn in a really eye catching, early 90's style.  I've never been that big a fan of the big muscle men and big boobed / small waist style women of that period yet the art is so well drawn that it works fantastically well here.  In fact, it even adds a layer to the story.