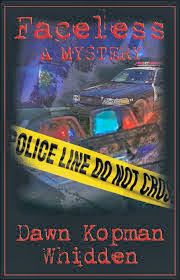 A pretty teenage girl is found dead in the woods, her face horribly mutilated. A few days later, a second girl, also strikingly beautiful, is attacked in a similar fashion.

Who would do such a brutal thing—and why?

Is there some sort of psychopathic monster lurking out there, preying upon vulnerable females? Or were the victims targeted for some reason by someone they knew?

It’s up to two of Fallsburg’s finest, Detective Jean Whitley and her new partner, Marty Keal, to find out who’s responsible for the grisly crimes.  When she starts digging up clues, Jean is startled to learn that the crime has hit uncomfortably close to home. The victims—and many of the potential suspects—are classmates of Jean’s fourteen-year-old daughter, Bethany.

To make matters worse, Bethany’s behavior has drastically changed. Jean’s sweet, loving child has become a sullen, secretive stranger.  How much does Bethany really know about the victims—and the crimes that have taken place? Did Bethany’s hunky new heartthrob have anything to do with the crimes? And why does the mounting evidence keep pointing to a popular parish priest?

Dawn Kopman Whidden’s newest book, Faceless, returns readers to the town of Fallsburg, New York, as seen through the eyes of Detective Jean Whitley, two years after the events of Whidden’s previous book, A Child is Torn.

Suddenly deprived of her longtime police detective mentor and friend, Jean is forced to take the lead in this latest investigation, while breaking in a new partner.  As they dig deeper into the case, Jean encounters threats to her career, her family relationships, and possibly even to her own daughter’s life.

Through it all, Jean and Marty must unravel a multi-layered mystery and put a face on the unseen villain, before anyone else ends up dead…and faceless.

I'm a big fan of crime thriller novels, especially those of people such as Kathy Reichs and Patricia Cornwell.  Those two writers seem to have a twist and turn around every corner in their stories.

When I picked this crime thriller up to read, I was struck by how easy flowing the writing in this story was.  You could easily find yourself reading page after page without realising just how many pages you have read in that sitting.

Another thing that I noticed was just how adept Whidden is at crafting a well rounded story with characters that you can really get involved with.  A lot of crime thrillers just say this person is the detective, this person is the killer there you go and add it up yourself.  Widden doesn't do that.  Each character has a back story and a motive for how they act throughout the story and that, for me, really raises it above a lot of the other crime novels out there.

One of the strengths of the book is that while one of the main characters returns from her most novel, 'A Child Torn', you don't need to have read that one to be emotionally involved.  Instead, the character comes across as well rounded and manages to not fall into the normal cliches that sometimes trap other writers.

I especially liked how Whidden drops a subtle hint as to the killers identity in the book yet does it in such a subtle way that you just think nothing of it until you get to the reveal.  That's when it hits you like a brick.  The reveal is really helped by how adept the author is at creating so many twists and turns that when you do finally discover the culprit, it's quite a shock for the reader.

The writing style reminded me a bit of Patricia Cornwell in that the story is set out in such a way that it really does bring out many emotions in the reader, in fact there were times when I was getting angry with one of the characters.  I mean that in a most sincere and complimentary way because I loved how you just wanted to grab Jean by the shoulders and tell her to get her act together.  It's rare for a book to grab me like that but this one did that and then didn't let go.

While the changing point of view normally is a bug bear for an avid reader such as myself, Whidden does it in such a way that you're never lost.

All in all if you love books by authors such as Patricia Cornwell or Kathy Reichs then it is definitely well worth picking up.  You may  just find your new favourite crime author.