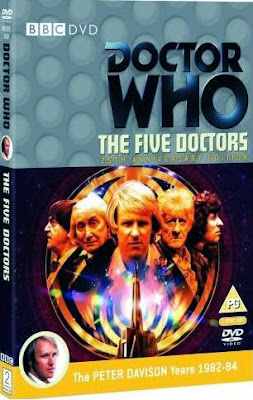 Someone is taking the Doctor's past selves out of time and space, placing them in a vast wilderness - a battle arena with a sinister tower at its centre. As the various incarnations of the doctor join forces, they learn they are in the Death Zone on their home world of Gallifrey, fighting Daleks, Cybermen, Yeti...and a devious Time Lord traitor who is using the Doctor and his companions to discover the ancient secrets of Rassilon, the first and most powerful ruler of Gallifrey.

The Five Doctors was originally broadcast to celebrate the Twentieth Anniversary of Doctor Who in 1983. This new version of the story features extended scenes, previously unseen sequences, new visual effects and a stereo soundtrack. Not intended as a replacement for the original edition of the story, this is an alternative version which uses state-of-the-art technology to embellish and enlarge one of the greatest Dr Who adventures ever...

Five versions of The Doctor all in the same special?  That  should get the geek pulses working overtime shouldn't it?  Well, that doesn't quite happen here.

What we do get is four versions of The Doctor and not five per se as Tom Baker decided he wasn't going to come back for the special so they had to write him out somehow.  Cue them using some unused footage from the story called 'Shada' and then saying he was stuck in time.  That was a bit disappointing as I'm a big Tom Baker fan but we have the rest of the cast here and they do a pretty good job with the dialogue and story that we have.

Sadly William Harnell had passed away before they filmed this story so we get the first Doctor in the shape of Richard Hurndall who does a very good job at recreating the beloved character.  He really does have the mannerisms down brilliantly.

The rest of the gang are all here and what a great dose of nostalgia they bring with them.  Jon Pertwee and Patrick Troughton slip back in to the roles as if they were never away.  In fact, Troughton gives the best performance by far in this story, although Pertwee does come a very close second.  It's their chemistry with each other that really brings the story to the forefront.  I loved their constant bickering throughout the story as well.

Story wise, it's not the greatest Doctor Who story ever made and in some places it falls quite flat.  However, it's the nostalgic side that really brings the quality up.  It felt like seeing an old favorite band getting back together for a one off gig or something along those lines.  It's really the performances that raise the rating of these higher than it would have been otherwise.

The special features, while really good and a lot better than some of the television series coming out today, just didn't seem up to the normal very high standard set by some of the other classic Doctor Who serials that we have been treated to.

If you are a Doctor Who fan then this is a DVD well worth picking up.  The sheer level of fun and nostalgia for the fans there is unmeasurable to be honest.  It's more than worth picking up just for Pertwee and Troughton's chemistry and the fun of seeing them bicker and insult each other.  It's true that it didn't live up to the promise that it showed but it still is a hell of a lot of fun to watch.