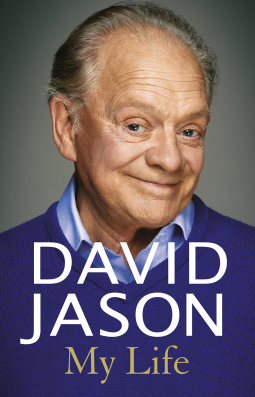 The long-awaited autobiography of one of Britain's most-loved actors.

Born the son of a Billingsgate market porter at the height of the Second World War, David Jason's early life was spent dodging bombs and bullies, both with impish good timing. Giving up on an unloved career as an electrician, he turned his attention to acting and soon, through a natural talent for making people laugh, found himself working with the leading lights of British comedy in the 60s and 70s: Eric Idle, Michael Palin, Bob Monkhouse and Ronnie Barker.

A Touch of Frost ran from 1992 until 2010, winning nine major television awards. The final episode drew in over 8 million viewers.

David's is a touching, funny and warm-hearted story, which charts the course of his incredible six decades at the top of the entertainment business. From shopkeeper to detective inspector, crime-fighter to market trader, who knows where he'll be this time next year.

Famous for roles in television shows such as 'A Touch of Frost', 'Open All Hours' and 'Only Fools and Horses', David Jason is an actor that I have been a fan of since my childhood so imagine my absolute delight when I heard he was finally going to be writing his life story.

Once I'd gotten my hands on it I practically devoured it from cover to cover.  I was a bit worried that his personality might not translate as well on to the page as it would on the screen but it really does.

His easy flowing writing style really draws you in to hearing the various stories about not only his career but also his childhood and much more.  It really did feel like you were sat with an old friend just having a chat about the past and then about the hopes for the future.  Even though you know the roles David Jason has played so well, some of which have given us some absolutely brilliant television and movie memories, the stories behind those performance are absolutely fascinating on so many levels.  It was also really interesting to see his thoughts on some of his famous roles.

At the same time as seeing these great insights in to his career, there are also some amazingly heart warming moments as well.  Jason really hasn't had the easiest of lives yet he doesn't once seem to dwell on anything, instead making it come across as a positive thing because all these moments are what made him in to the person he is today and that person is one of the most well respected actors that Britain has ever produced.

If you are a fan of any of the shows that David Jason has appeared in then this autobiography is an essential purchase and definitely one that would hold up to repeated readings.  If you are a fan of the man himself, then I'm sure you'll already have this in your collection and so you should.  It's one of the most heart warming and optimistic autobiographies that I have read for a long time and it manages that with out being over sentimental.  I can't wait to see just what the legendary David Jason is going to do next in his career, especially seeing as he shows no chance of slowing.

Email ThisBlogThis!Share to TwitterShare to FacebookShare to Pinterest
Labels: A Touch of Frost, Actor, Autobiography, Book, Classic Television, David Jason, My LIfe, Only Fools and Horses, Open All Hours, Review