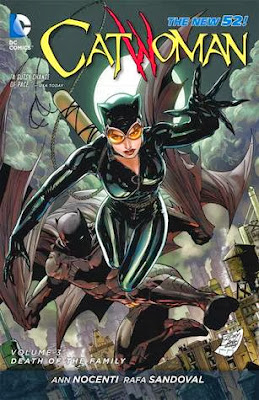 Written By Ann Nocenti
Art and Cover By Rafa Sandoval

Writer Ann Nocenti begins her run with the feline fatale!

Catwoman must stay one-step ahead of the Joker as he terrorizes Batman and his allies during the Bat-Family crossover event "Death of the Family."

But there's no rest for the wicked as hot on the heels of her encounter with the Clown Prince, Catwoman is hired to break into the Black Room to steal the Black Diamond--the source of power for the villainous Eclipso!

The third volume of the 'New 52' Batman series really showed just what a good writer can do with the 'Death of the Family' story line so I had massively high hopes for this installment featuring Catwoman.

Armed with a new writer with a lot to prove to fans of the series, there was a lot riding on this set of issues and for some reason, it ended up just feeling like they had gone through the motions to shoe horn The Joker's story line in to this collection.

Story wise, it falls a little bit flat.  There were some high spots for the fans in that they showed a little bit more of the Catwoman character but it kind of annoyed me in a way because pretty much everyone in the stories seemed to know her secret identity.  That begged the question of if all these people know who she is then how has she not been arrested for breaking in to all these places?  I know that sometimes you have to suspend your belief in logic but that was just lazy writing.  It was the same with the dialogue, it was just downright inane in places.

Art wise, the art on show here is good but not great.  It's the sort of art that does it's job but without excelling at it.  Don't get me wrong, I didn't hate it, it's just that like the story itself, it fell a little bit flat for me as the reader.

Maybe I was too spoiled by the superb work that Scott Snyder did with the 3rd volume of Batman but this one just seemed a bit lacking.