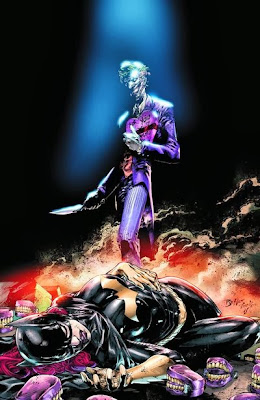 Gail Simone continues her Batgirl run in a tale that ties into the best-selling Bat-Family event "Death of the Family."

When the Joker returns, Barbara Gordon must confront her past as she deals with the crazed criminal responsible for crippling her.

Plus, once the dust settles, Barbara must deal with her family demons as her psychotic brother James Jr. comes after her.


So far, I've read two graphics set during the 'Death of the Family' story.  'Batman: Volume 3' was absolutely superb and one of the best Batman volumes that I had read for a very long time.  'Catwoman: Volume 3' however was very disappointing and all over the place.

This one however, was much better.  I will admit that it wasn't up to the massively high standard set by the Batman installment penned by Scott Snyder but at the same time, it came pretty close to it.

The story involving Batgirl's role in the 'Death of the Family' story line was incredibly well done.  I liked the fact that there were links to the other stories yet you can also read it as a standalone title as well.  That side of things were really chilling and effective.  This was because of the superb writing by Gail Simone.  She really manages to write Batgirl in such a way that it makes a character that I wasn't brilliantly enamored with and makes her in to a character that I want to read more of.

One of the problems with this title was the fact that the story sometimes flits from so many different points of view that it can sometimes get a bit muddled.  The other thing that bugged me a bit was the fact that they reprinted part of the Batman story from the 'Death of the Family' crossover.   Having not long read it in 'Batman: Volume 3', it felt rather unneeded and a bit over kill.

I also really enjoyed the story involved James Gordon Jr. as well.  That story is quite creepy and supremely well written.The fact that they included the story in the end of this collection, leading to a brilliant cliffhanger was a bold and effective move.  It left me wanting to get my hands on the next volume as soon as possible.

Cover wise, Ed Benes does a great  job of creating a cover that really hooks the reader in to wanting to see just what is inside the graphic novel.  There's a feeling of dread and danger in the art for the cover and that's exactly what is needed for this storyline.

All in all, this volume is much better than the Catwoman one, in fact it came very close to matching the utterly brilliant Batman one.  The only thing keeping the title from getting a higher score was the fact that they felt the need to reprint part of the Batman story and that there were a couple of moments that felt a little bit muddled.

This is still definitely well worth picking up.