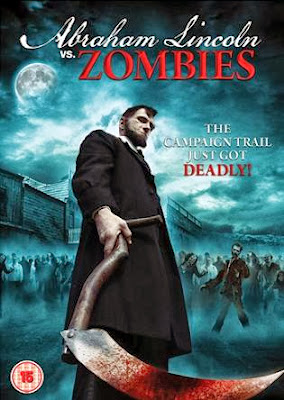 While the Civil War rages on, President Abraham Lincoln must undertake an even more daunting task - destroying the Confederate Undead.

If the production company known as The Asylum or the mere mention of the 'mockbuster' makers make you groan or shudder at the movies they make, then you may want to click the back button on your browser.

For the rest of us, I decided to take a look at this one after watching the big budget 'Abraham Lincoln: Vampire Hunter' just to see how the two would match up.  One had a big budget whereas this one, well not so much.

You really much know what you are going to get when you put a movie made by The Asylum in to your DVD or Blu-ray player.  It's going to be a cheesefest and more likely than not, unintentionally but hilariously funny.  That is most definitely the case here.

Here, we have 'Honest Abe' kicking ass and taking names when a zombie outbreak erupts during the American Civil War.  Yes, this movie really is as silly as it sounds.  If you are expecting an arthouse movie or an intelligent,, thought provoking  movie then maybe a movie that has Abraham Lincoln cutting up zombies with a scythe isn't a good fit for your viewing pleasure.

The acting, as is pretty much the norm for an Asylum movie, alternates between being good and being awful yet weirdly, that gives this movie some of it's charm.  It's the kind of movie that knows exactly what it is and doesn't try to hide it at all.  However, Bill Oberst Jr. is absolutely superb as Lincoln.  In the midst of complete and utter insane action, he manages to bring a charm and grandeur to proceedings.

Asylum really do go all out for this movie and there is blood, guts and everything in between.  The CGI and special effects are hit and miss however.  In some scenes they're used really well and in others, well, in others they look like they were done by a work experience kid on his lunch break.

All in all, I really enjoyed this movie and for that I'll be giving it a good rating because let's face it here guys.  Sometimes watching a movie that's of the 'so bad it's fun' variety can be just as enjoyable as watching a classic.  Well worth picking up for some mindless, zombie fun.