Wrestling With the Devil By Lex Luger With John D. Hollis Review 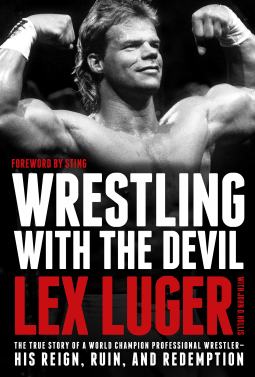 Lex Luger, wrestling megasensation and three-time world heavyweight champion, ruled the ring for years as “The Total Package.” Whether he was making a dramatic entrance from a helicopter, defeating champ Hulk Hogan, or sculpting a near-perfect physique, Lex was on top of his game.

Yet backstage, he was wrestling with addictions to sex, drugs, and alcohol—things he clung to even when his mistress died suddenly of a drug overdose and Lex went to jail.

There, Lex faced the truth: he was losing the fight for his life. And still awaiting him was his most brutal opponent yet, when the wrestling champ found himself helplessly paralyzed from the neck down.

In Wrestling with the Devil, Lex Luger reveals never-before-told stories from his career, his struggle with personal demons, and how, through unexpected faith, grace, and redemption, he overcame all odds to fight the only battle that really matters.

Yes you have read that right dear readers of mine.  This is the second book with the title 'Wrestling With the Devil' to be reviewed on this site but that's where the problem lies.  The first by Tonya Russo-Hamilton and Tony Russo,  was so well written and would hook the reader in to such an extent that this one has a definite uphill battle to match the quality of that one.

While I will be completely honest and tell you all that this one doesn't match that level, this is still a very good and interesting look at one of the most recognised faces in professional wrestling.

Lex Luger was a huge star in the late 80's and early 90's, having matches with some of the biggest names in wrestling.  Sting, Hulk Hogan and many more all face him in the ring.  In fact, Sting, even wrote the foreword to this book.

One of the strengths of the book is that it is very brutally honest, at times even comfortably so.  No stone is left unturned and he really goes in to detail about his demons.  The way Luger writes about his battle with drink and drugs is well documented and he doesn't try to make any excuses for any of his actions.  Instead he comes across as someone who truly just wants to make amends for all the wrongs that he has both done himself and had done to him.  I found that approach very admirable and felt incredibly sorry for him throughout the book.  It's a heartfelt look at his life and the successes as well as the failures.

While some have complained that his career only makes up a quarter of the book, I have to admit that I think they're kind of missing the point of how he has written it.  It kind of feels a little bit like a eulogy at times because he talks about himself as if the version of him that was fighting drinks and drug addled demons, it's almost as if he feels that is a completely different person.

A lot of the book is about the fact he managed to find religion and that's what he credits still being alive to.  He's wonderfully honest with this side of his life and talks about it without sounding massively preachy.

At times 'Wrestling With the Devil' can come across as a bit of a hard read because of how honest he is but at the same time, it's a fascinating look at someone who succumbed to his demons only to fight his way out the other side.  Well worth picking for the wrestling fans out there.