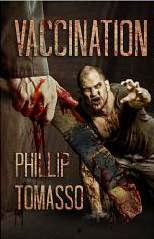 What if the H1N1 vaccination wasn’t just a preventative measure against swine flu? It seemed like the flu came out of nowhere and yet, in no time at all the government manufactured a vaccination.

Were lab workers diligent, or could the virus itself have been man-made?

Chase McKinney works as a dispatcher at 9-1-1. Taking emergency calls, it becomes immediately obvious that the entire city is infected with the walking dead. His first goal is to reach and save his two children.

Could the walls built by the U.S.A. to keep out illegal aliens, and the fact the Mexican government could not afford to vaccinate their citizens against the flu, make the southern border the only plausible destination for safety?

Just recently I've felt quite burnt out on zombie novels.  Don't get me wrong, I love the zombie genre but after reading a couple of really bad novels from the genre I was feeling really burnt out.

However, that massively changed when I read this one by Phillip Tomasso.

While the idea of a vaccination or a virus spreading and turning people in to zombies isn't a new idea in the slightest, the strength of Tomasso's writing raises this novel head and shoulders above some of the cliched novels in the genre.  His blunt and well paced style really made the scenes stay in your mind long after you had finished that particular section of the book.

The characters are likeable to such a degree that when they are in danger you are rooting for them to get to safety.  There were a few moments in the book where I had gotten so behind the characters lives that I was on the edge of my seat wanting to know what was going to  happen to them.

I loved the idea of the story being told for some of it in the P.O.V. of a 911 operator was a sublime choice because it gave the story a human side and really hooked you in.  Especially the scenes where the character felt so hopeless and overwhelmed by the calls coming in and knowing that there was next to nothing that could be done to help other than place the call to the people who could help the most.

One of the main strengths of the writing was, by far, the pacing is the absolute backbone of the book.  Tomasso really seems to know when to slow it up a bit and when to crank up the tension.  In fact, his style reminded of another author named Joseph Souza in that Souza is another author that is able to chose the right time to change up the pacing.

All in all this is definitely a book worth picking up.  There are likeable characters, a great ending and some very taut thrill filled moments that really raise this head and shoulders above a lot of the other zombie novels out there.