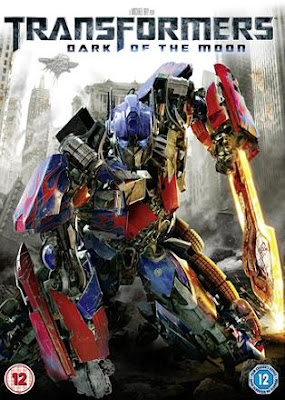 A mysterious event from Earth's past threatens to ignite a war so big that the Transformers alone will not be able to save the planet.

Sam Witwicky (Shia LaBeouf) and the Autobots must fight against the darkness to defend our world from the Decepticons all-consuming evil in the smash hit from director Michael Bay and executive producer Steven Spielberg.

Every once in a while a movie comes out that you watch and you just wonder how on Earth something so bad and inane could have been made.

This is most definitely one of those movies and then some.

Well, I was right on that count.  It really wasn't that bad.  It was worse.

The best way to describe this movie is that it's exactly like a car crash.  It's the sort of thing that while you don't want to look at it, you can't help but do that.

The special effects are visually impressive but what would you expect from a movie with such a high budget that involves many  robots beating the daylights out of each other?  The problem with that is while it looks good, it comes across as that being all they spent the money on.  The cast are pretty much there to make up the numbers, the script is a complete mess and there are even characters from the first two movies that do a complete 360 personality wise.  Cough cough John Turturro cough cough.

Another thing that bugged the hell out of me is that while the movie is called 'Transformers: Dark of the Moon' it comes across as having the Transformers themselves being surplus to requirement and feeling like they were thrown in just for the hell of it.  The movie plays like it's more concerned with whether or not Sam Witwicky can find a job and keep his girlfriend and the impending war between the Autobots and Decepticons are merely an inconvenience.  They should have just called it 'Can Sam Get A Job?' and been done with it.

While the battles and the special effects do look very impressive, the Transformers themselves are so devoid of personality that it's hard to tell just who is who.  In fact, it's even hard to give a crap about who is who during the battle scenes.  The only Transformers that stand out are Optimus Prime and Bumblebee with Megatron being a shell of a character, who walks around wearing a hood as if he's trying to find his way to the Shire so that Frodo can recharge his batteries.  The rest of them are so similar that they merge in to one, pun intended, or they're so ridiculous that you can take them seriously.  You have Transformers with beards, dreadlocks, hell even ones that have blatantly ripped off the Predator as well.

I honestly thought the days of releasing a disc with only the movie on it and zero special features only to release a special edition to squeeze money out of the fans were over but obviously not.  I'm quite happy that there were no special features here because then I don't have to listen the cast or crew, especially Michael Bay, talking about how brilliant they think both they and this abomination of a movie are.

The only reason that the movie is getting a 2 from me is Alan Tudyk's massively over the top yet funny performance as Dutch.   While the rest of the movie is unintentionally funny, Tudyk really ramps up the insane with his portrayal of a comic character so at least there was that one bright spot.