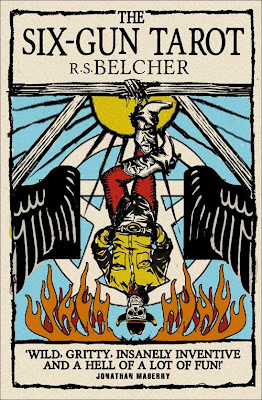 Nevada, 1869: Beyond the pitiless 40-Mile Desert lies Golgotha, a cattle town that hides more than its share of unnatural secrets. The sheriff bears the mark of the noose around his neck; some say he is a dead man whose time has not yet come. His half-human deputy is kin to coyotes. The mayor guards a hoard of mythical treasures. A banker’s wife belongs to a secret order of assassins. And a shady saloon owner, whose fingers are in everyone’s business, may know more about the town’s true origins than he’s letting on.

A haven for the blessed and the damned, Golgotha has known many strange events, but nothing like the primordial darkness stirring in the abandoned silver mine overlooking the town. Bleeding midnight, an ancient evil is spilling into the world, and unless the sheriff and his posse can saddle up in time, Golgotha will have seen its last dawn…and so will all of Creation.

I have to admit that this is a debut that nearly flew under my radar and it would have done too had it not been for those lovely folks at Titan Books asking if I was interested in it due to my other steampunk style reviews.

The first thought in my head was a steampunk western would be too far a mixture to actually work and that it would be disjointed as hell.  Throw in elements of fantasy, mythology and the supernatural and I honestly thought that this book was going to be one big mess of a novel.

This novel is most definitely one of the best books I've read all year and positively gripped me from the beginning to the end.  The slow pace at the beginning works so well because there are just so many characters and settings to create but Belcher manages to do all of that as well as creating the world that the story will be based in, without overloading the reader.

There are many stories all going on at once and told from many different characters POV's yet it works without feeling disjointed at all.  In fact, it comes across as a jigsaw and the further you get in to the story the more pieces of the puzzle you get.  I loved that approach because it felt like watching a television series and made me want to see just what was going to happen to each character next.  As the story trundles on, all the pieces come together to give the tale a great ending.  It's really made me hope that there will be a sequel because I would love to see just what the characters will get up to next.

One of the most surprising things about this book for me as a reader was the fact that this is a debut  book.  In fact, it read like a confident, accomplished novel that has really made me want there to be more books by Belcher because he is most definitely an author to keep an eye on.

Posted by Pat Scattergood at 02:11