The Sarah Jane Adventures: Invasion of the Bane DVD Review 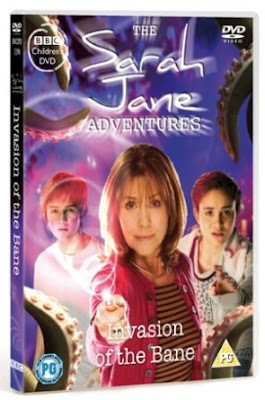 Sarah Jane Smith is a truly remarkable woman. She inhabits a world of mystery, danger and wonder. A world where aliens are commonplace and the Earth is constantly under threat. A world that Maria Jackson - a seemingly ordinary girl - can only dream of until she moves in next door. Nothing will ever be ordinary again.

In the first adventure, there's a new drink taking the world by storm - Bubbleshock! Everyone's drinking it. When Maria's dragged along to the factory tour by her new friend, Kelsey - a girl with an opinion on everything - she's plunged into the sinister world of Bubbleshock and the mysterious Mrs Wormwood.

There's something terrible behind the hype - something Sarah Jane's interested in too...

'Doctor Who' has been a long running and much beloved series for many fans growing up as well as the new fans that the revived series has brought in to the fold.

While the spin off 'Torchwood' was a bit hit and miss because it didn't seem to know whether or not it wanted to be a serious science fiction series or a tongue in cheek one, 'The Sarah Jane Adventures' started with a bang with this feature length episode.

As an episode to introduce the characters, it works really well.  It was a great way to reintroduce the much loved and now sadly missed character of Sarah  Jane to a younger set of fans.  In fact, while it was a great introduction for new fans, for us older ones it was almost as if Elisabeth Sladen didn't miss a beat with her performance.

As for the story, when I watched it with my little lad, he was absolutely gripped all the way through.  The story took a turn in to darker territory part way through but not enough to scare the little ones too much.  The fast pacing that the revived 'Doctor Who' series is definitely present here and that really makes the story crack along in an exciting way.

After seeing this feature length episode, I'm definitely going to grab the series box sets, especially after seeing how much my lad enjoyed this one.

Well worth picking up if you're a fan of the sadly missed Elisabeth Sladen.

Posted by Pat Scattergood at 05:32