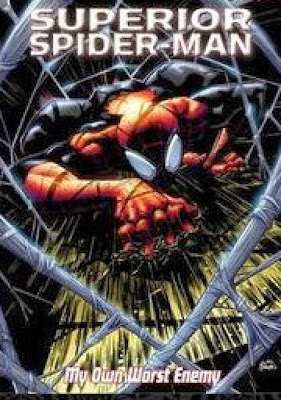 Peter Parker spent a lifetime living up to the responsibilities his powers foisted upon him, but his story finally ended dramatically in the historic Amazing Spider-Man #700.

NOW!...The new Amazing Spider-Man has arrived, and he is better in every single way. Smarter, stronger...Superior. And he'll prove it, both to himself and the world, when he faces down the all-new Sinister Six!

But is this all-new Spider-Man in cahoots with J. Jonah Jameson? And has Carlie Cooper figured out the Superior Spider-Man's secret identify? Plus: Spider-Man and Mary Jane...reunited?!

All this and the return of the villainous Vulture! It's an all-new era of web-slinging excitement, and it all starts NOW!

With both DC having a major revamp under the banner 'The New 52' and Marvel doing the same under the 'Marvel Now' banner, there have been some major changes to some of the most famous superheroes in the comic book world.

That's when Dan Slott did the unthinkable.  An act that had fans in absolute uproar.  He killed Peter Parker!  Not only that but he then put Doctor Octopus's mind in to ol' Spidey's body!

That move got one of two reactions from the fans.  Some thought that it was a remarkably brave move and carried on reading the title.  Others, well others went the opposite way.  They deserted the title, they sent death threats, wrote letters of protest and much more.

Now that the dust has settled on those events, does the title warrant people coming back and having a look at one of the shocking story lines in recent memory?

Well, yes and no.  When this title first started, I have to admit that while I was hooked in to seeing just where Slott was going to take the character next, something felt like it was missing.  That said, this title is definitely one that rewards the long term reader.

The issues collected here are the ones that laid the groundwork for the future issues that are now firing on all cylinders and as such, have a couple of hiccups here and there.  For the most part this is a brave and compelling title.  When I first read about the whole switching minds thing, I didn't think it would work because it sound like a really hokey idea on paper.  Yet Slott's writing does make it an exciting and very different story.

It's not entirely successful however for a couple of minor reasons.  One, the art changes halfway through this collection.  For the first couple of issues, it's quite a dark, angular art style that really works for the darker moments in the story but then it suddenly changes in to a more cartoon style and that's kind of a shame.  If it had have stuck to the darker style, I think the story would have felt a lot grittier and hard hitting.

Talking of the art, there are some absolutely brilliant panels in this collection.  Some of the later ones do struggle a little because the darker dialogue seems at odds with the cartoon style of the art.  That said however, the story is still quite successful.

Despite the protestations from the die hard fans that Slott ruined Spider-Man, which I honestly don't think he has, 'Superior Spider-Man' takes the character in a completely new direction.  It's true that it's not 100% successful but it's definitely a title that will grow on you if you give it a chance to.

Posted by Pat Scattergood at 14:31