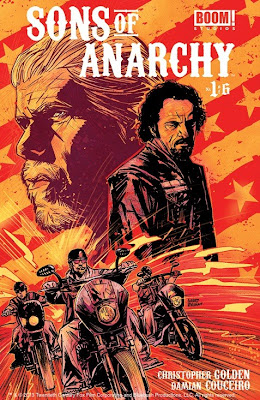 With no one else to turn to, the daughter of an old SAMCRO member comes to Charming looking for help.

The only people standing between Kendra and certain death are the Sons of Anarchy, and, for better or for worse, Sergeant-at-Arms Tig.

As a fan of the 'Sons of Anarchy' television show, I was both excited and dubious about the idea of a comic book adaptation or spin off.  Even though it's by Boom! Studios, I was still a little worried that maybe they wouldn't be able to get the tone of the show or the personalities of the characters as well as the show itself does.

I was a bit more dubious when I saw the Garry Brown cover for the 6 issue series.  For me it just didn't grip me or make me excited to read what was inside.  However, this is definitely a case of not judging a book, or in this case a comic, by it's cover.

What is inside the cover  is the first part of what is shaping up to be a very interesting story with the beloved characters in all their glory.  Tig is most definitely in the foreground for this story by the looks of it and that's fine by me because, as a fan, I think he is one of the most interesting characters out of the whole gang.  There are nods to what has happened in recent episodes of the show but also to characters pasts that we haven't seen yet.  I like that approach.  It both rewards long standing fans of the show but also hooks in the people that haven't seen it.

That's one of the problems of the issue here.  If you're not up to date with the recent happenings of the biker gang from Charming then there are a hell of a lot of spoilers here for you.  Deaths of characters, plot lines and the such.  Also, if you're not a fan of the series, you may also be a little bit lost in places.

The art  here captures the personalities of the characters really well and also gives proceedings a dark, grimy feel.  That really helps to push the story along at a great looking pace.  Teamed with the writing, the art really does do the series justice.  I especially liked the fact that the fight scenes looked exciting and full of action yet didn't look at all cluttered.  However, there were times  that the coloring just seemed a little off and a little too bright, which when compared to the dark and grimy feel of some of the other panels just seemed a bit out of character.

All in all, if you are a fan of the 'Sons of Anarchy' television show then this is definitely going to deserve to be in your collection.  If you're not a fan or you haven't watched the show then you may find yourself a little bit lost in places.

Another quality adaptation by Boom! Studios!