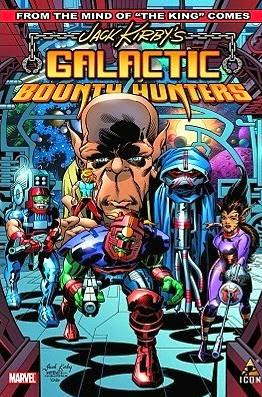 But when young Garrett Berkley discovers his parents' secret - that the science-fiction stories his father writes aren't fiction at all, but autobiography - he's blasted into a whole new universe of adventure, mystery and danger.

Now, Jack Berkley must put down his pen, reassemble his old team and take up the mantle of being a Galactic Bounty Hunter for one final mission!

Jack Kirby was and always will be an absolute legend of the comic book world. Some of his most notable work reads like a who's who gallery of comic book legends. Hulk, X-Men, Captain America, Fantastic Four, Thor, Manhuner, the list just goes on and on.

When his wife sadly passed away, his daughter Lisa found some drawings, story outlines and set about getting these characters and stories brought to life. Obviously not an easy task because nobody can even come close to matching the sheer talent of Jack Kirby but the finished article, while with it's inherent flaws, reads like a pretty good tribute to the man himself.

The writing and the artwork really hark back to the golden age of comics, in which Kirby himself found his fame and fortune. That really lends an old school charm to proceedings but that is also part of it's downfall as well. The writers and artists come across as trying too hard to be too much like Jack Kirby instead of using his ideas and putting their own stamp on it. Imitation may be the sincerest form of flattery but in this case, it's also the sincerest flaw of this release.

The stories themselves are incredibly fast paced and bring to the old serials with such characters as Flash Gordon trying to save the world. It's just a shame that while all these little nods to the 'old era' are welcome that it also takes away from the originality of this title somewhat.
Another one of the things that I did like may seem like a minor detail but I liked the idea behind it. One of the bounty hunters had 'hung up his boots' so to speak and become a father yet had written about his exploits under the disguise of being a fantasy writer. While not the largest part of the story perhaps, I did like idea behind it as that was definitely one of the things Kirby was best at. Giving a character traits that the reader could relate to while at the same time being fantastical enough to provide a get away from every day life.

For me one of the main things that succeeds is the absolute treasure chest of information that comes after the end of the story itself. There are interviews galore about how the project itself came about, there is a short and concise profile of Jack Kirby himself, original artwork for the book as well as a ton of artwork for forthcoming releases from the Jack Kirby team. An absolute gold mine for fans such as myself.

All in all while this release has a certain old school charm, I would recommend it but not as high as I would any of the other Kirby releases.

However it could prove to be a good starting point for anyone wanting to get in to the comic book world created by Kirby himself.