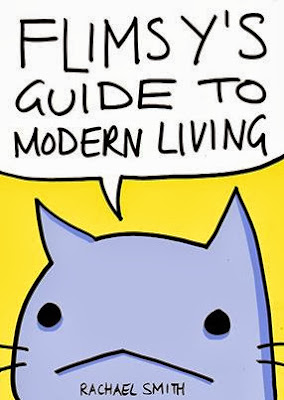 Readers of this site will be very aware of the superb comics 'The Way We Write' and 'I Am Fire' written and illustrated by the super talented Rachael Smith so it will come as no surprise to any of you that I was very eager to get my butt over to the launch party of another comic release by her, this time being 'Flimsy's Guide To Modern Living'.

When I first got to the venue, the intimate nature of it really brought home how amiable and personable Rachael Smith is with her fans.  Throughout the night she could be found talking to her fans about her work and pretty much anything else.

This wasn't just any bog standard launch however.  There was an absolute plethora of entertainment on show ranging from sketch comedy from Sad Little Flyer that had me in stitches to some great compere work by  the Geordie comedian Neil Warner.  There was also a set Lindsey Warnes Carroll, whose set involved a blow up Nick Clegg, a puppet theatre and '50 Shades of Grey' told in the form of dance with action figures.  With also music from Weikie and a performance by Richard Peel, there really was something for everyone.

As a launch for the comic, this was hugely successful one.  Rachael Smith was swamped by her fans and rightfully so because she is an insanely talented lady.

Well, go on.  What are you waiting for?
Posted by Pat Scattergood at 12:48