Doctor Who: Day of the Daleks DVD Review 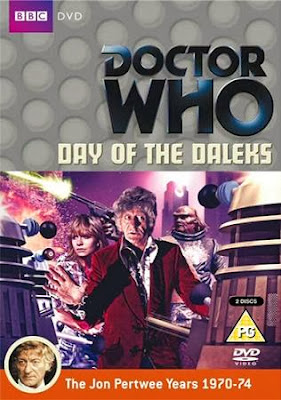 On Earth in the 22nd century, Daleks have enslaved the planet and humans live in fear of their masters. Meanwhile, back in the 20th century, a peace conference is urgently needed to prevent World War Three.

When reports reach UNIT of a ghost at Auderly House - the site for the conference - the Doctor and Jo decide to investigate.

Danger is waiting for them there, including a trip two hundred years into the future without the TARDIS...

Everybody remembers their first Doctor.  Well, mine was Jon Pertwee.  I was introduced to the character that would become a favourite for many years by my father after he brought home two Doctor Who VHS tapes.  One was 'Spearhead From Space' starring Jon Pertwee and the other was 'Terror of the Zygons' starring Tom Baker.

Obviously, I went for 'Spearhead...' and that's why Pertwee has always been a favourite of mine.  It's the same with Tom Baker.  The two of them have always been the two I have found most  interesting and long lasting.

So it was with great excitement that I put this DVD in and sat down to watch it.  Would Perwee's first battle with the Daleks be as exciting as his other  adventures or would it fall flat?

Well I have to admit that despite a few technical problems here and there, this is definitely one of the best of the Pertwee era.  The pacing fluctuates between fast and action packed and a slow deliberate pace that allows for character development.

There were a couple of moments where the politics seem a little hokey but there are moments where they seem eerily up to date.  I especially liked how they manage to juggle nods to the past battles with the Daleks but also hinted at the battles to come in the future.

One of the problems with this one, while minor flaws, manage to be a little noticeable.  The voices for the Daleks just seem wrong,  In fact, the voices seem more on the silly side than on the menacing side.  Also there are only three of them as well so the director seems to like trying various camera angles to make them seem more imposing.  Some of them work really well and others seem a little bit like the camera man has one leg shorter than the other.

Other than that, the story is absolutely superb.  The Daleks did seem a little shoe horned in to the story but at the same time, it was great to see Pertwee's version of the Doctor take them on.  The pace in the final episode of the serial, really brings a frantic worry to the story and that really ramps up the excitement for us 'old timers' of the Doctor Who community.

Special features wise, we are positively spoiled for choice, especially with the inclusion of the special edition of the story.  With new special effects, better Dalek voices and much more, the fact that you can watch either version depending on your mood is a fantastic treat for fans.  Add in all the other goodies that are here too and you have a goldmine for the fans.

All in all, while not without it's flaws, this is definitely one of the classic Pertwee stories that defined his time as The Doctor and really help to show just why his incarnation of the character is one of the most loved of them all.