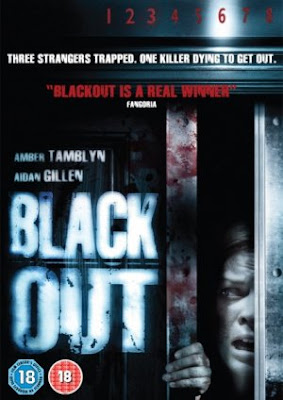 The clock ticks on three strangers trapped in an elevator who all have a desperate, urgent need to escape their confines. Claudia (Amber Tamblyn) is in a hurry to return to the hospital bedside of her dying grand-mother.

Tommy is a young punk on his way to elope with his girlfriend.

Karl (Aiden Gillen) has guilty secrets that must be erased from his apartment before his wife and daughter get there.

But all three are trapped in an elevator in a deserted building on holiday weekend - and are desperate to get out. What first seems an inconvenience soon turns into a nightmare when no one answers their calls, their meagre water supply runs out and one of them goes just a little bit crazy under the pressure.

Propelled by escalating tension and an increasingly desperate conflict, Blackout hurtles towards a terrifying climax.

Once in a while a horror movie comes along and it surprises you with just how taut and well made it is.  This is definitely one of those types of movies.

I'd heard nothing about this movie but when I saw that it had Armie Hammer, from 'The Lone Ranger' and 'Mirror Mirror', in it I figured that I would give it a shot as I like seeing him in movies.

While the idea behind the movie itself isn't the most original that I have ever seen, it is one of the best attempts at bringing that simple yet effective feeling of claustrophobia to the screen.

The movie most definitely stands on the three characters and their portrayals by the main actors and actress are really strong.  Armie Hammer takes the stereotypical role of a young punk rocker but actually gives him more of a personality that you would normally find in a movie like this.  Amber Tamblyn gives a great performance as a guilt ridden woman, who just wants to get back to her grandmother before she passes away in hospital and then you have a man suffering the loss of his wife.

They're not the most original characters in the world but the portrayals here make them really interesting and there are times when you just can't take your eyes off of their performances.

The one part that I felt undermined the strong performances was that  once the identity of the murdered was revealed, the person playing that part started to become really melodramatic and over the top, which considering the subtle and interesting performances that had come before made those moments feel really out of place.

All in all, a very interesting movie with some good performances but slightly let down by an over the top final third that nearly undid the subtle brilliance of the rest of the movie.

Posted by Pat Scattergood at 03:33