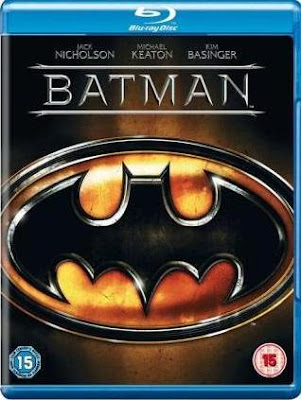 After a young boy witnesses his parents' murder on the streets of Gotham City, he grows up to become Batman, a mysterious figure in the eyes of Gotham's citizens, who takes crime-fighting into his own hands.

He first emerges out of the shadows when the Joker appears - a horribly disfigured individual who is out for revenge on his former employer and generally likes to have a good time, but the identity of the "bat" is unknown.

Perhaps millionaire Bruce Wayne and photographer Vicki Vale have a good chance of finding out?

I remember this film being released in 1989, it was massive, on day of release I was in Plymouth and people began queuing at 10am for a 8pm showing, but did this film deserve it and has it stood the test of time.?

Honestly? Yes to both.  In my opinion this is still the best batman film ever made, in spite of all the mistakes (and there are loads), I feel this film has yet to be bettered.

Michael Keaton is great as Batman/Bruce Wayne but the film is stolen by the magnificent Jack Nicholson as The Joker who pitches the character exactly right.  In fact for a long time I used to say the film should be called The Joker because he is so obviously the main protagonist and I feel that no one has played Joker better yet.

The film score by Danny Elfman is magnificent but the film soundtrack by Prince is uninspiring and seems out of place, but that is the only down in this fantastic film.

The film deals with the origin of Joker and does it very nicely indeed.  Director Burton then unleashes Nicholson to chew up the scenery and the result is a bravura performance which raises everyone's game in the film.

Michael Keaton was a brave choice at the time with loads of fans being incensed by the casting, but he is a fantastic Batman and is only bettered by Christian Bale.  He uses a different voice for Batman to Bruce Wayne, a little thing but never done before and makes it seem more realistic.

Kim Basinger as Vicki Vale is kind of surplus to requirements and is mainly used to get Batman and The Joker together but she isn't really needed.

Pat  Hingle as Commissioner Gordon is woefully miscast but the character is so underused you forget about him, which is a shame as Gordon should be a main character.

Now for a bit of a whinge.

Joker says to Bruce Wayne "do you ever dance with the devil in the pale moonlight" and claims he asks this of all his prey.  Ummm sorry but no you don't.  In fact he only says it twice, both times to Bruce Wayne so add to this loads of continuity errors and the editing looks a little sloppy.

But don't worry about it too much just sit back and enjoy the magnificent take on the Batman, you  won't regret it.

Don't miss this film it deserves to be in every collection.