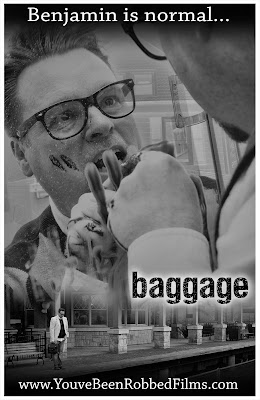 Benjamin is normal. He does his best to fit in with society. He goes to work, loves his significant other and has hopes and dreams just like you.

You will follow Benjamin for one day of his life, but will you still believe that Benjamin is normal after his world is revealed?

As a fan of the short movie 'No Clowning Around', I knew that when I started to watch this short that it would have a lot to live up to.

I can honestly say that not only did this live up to the standards set by the superb 'No Clowning Around' but it also surpassed it.

With short movies, especially one that's only about 15 minutes long, they tend  to feel rushed and you end up feeling like you have missed something vital.  That's not the case here.  In fact, they do the complete opposite and take their time.  The short run time is used very well and you can really get in to the story of this man who is slowly sinking in to madness, if he wasn't there already.

One of the main strengths of the movie was the massively strong performance by Rob Dimension.  He portrays the part in  such a way that it unsettles the viewer.  This is effective because the subtle performance makes the person watching the movie see and feel the things that the character does.  In fact, you can see a bit of yourself in the character and that's why it unsettles you throughout the movie itself.

Being shot in black and white also gives an old fashioned, Alfred Hitchcock feel to proceedings.  They use the settings and the filming style to full success here.  You don't see big budget movies with as effective an atmosphere as you see here.

If you have seen and liked 'No Clowning Around' then you are in for a big treat here.  It's being shown at quite a few movie festivals so if you get a chance to see it then I urge you to.  It really is that good.

Posted by Pat Scattergood at 12:59