An Evening With Colin Fry: The Happy Medium Tour 2013 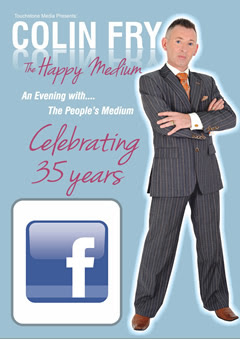 This year’s tour will once again see Colin Fry bring his own unique form of comfort and upliftment to ordinary people living ordinary lives, proving once again he IS very much the 'Peoples Medium'.

As what I like to call a cynical believer, I have seen quite a few mediums both live and on television.  Some are fantastic at what they do and others, well, others not so much but you could say that about most people in the world.

When I was told that I would be going to see Colin Fry appear live in my home town, I have to admit that I was both excited to see him firsthand but also a little worried that maybe the show wouldn't live up to my hopes for it to be entertaining and interesting.

I need not have worried in all honesty.  Even if you don't believe there is one thing that you can't deny.  That's that Mr Fry is an amiable and well versed host that is able to make each member of the audience feel like they are the most important in the room.  His jovial deliver of the banter in between the messages were positively hysterical and had me laughing as well as enjoying the atmosphere of the theatre.

Messages wise you can't really review that side of the show because they are different for everyone else.  One message that may be important and loved by one may not interest another.  Yet here, each person that received a message seemed profoundly touched by what they heard and saw.

All in all, this was a show or a demonstration if you would rather call it that, was a very enjoyable and informative show.  Not only did we get members of the audience getting some very touching messages, we also got some fantastic stories and jokes about his life and career.  The audience was then treated to a signing and meet and greet after the show.

Definitely a show worth going to if mediums interest you at all as Colin Fry is very entertaining and a personable figure from that world.