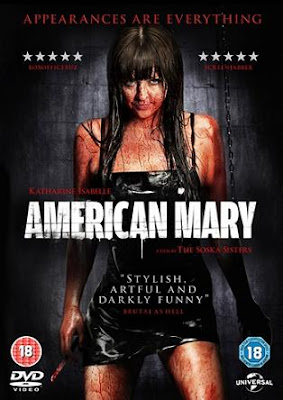 One of the year's most horrific highlights, American Mary tells the story of broke student Mary Mason (Katharine Isabelle) who grows disenchanted with medical school and the doctors she once idolised. The allure of easy money sends a desperate Mary through the gruesome world of underground surgeries but soon finds they leave more marks on her than the so-called freakish clientele...

There has been a hell of a lot of buzz generated about this movie so I went in to it with some massively high expectations.

I have to admit that while I came away a little disappointed in places and that I didn't think it lived up to the hype that surrounded it, I still think it's a good horror movie with a couple of strong performances.

The thing that I feel hurt the movie the most was that even though it  had a really good and different story, the directors just seemed to stick to the tried and tested things that we've seen in many horror movies before.  That's a real shame because there is a hell of a lot of talent on show and a massive amount of promise shown by the people that performed in the movie as well as the people that made it.

Performance wise, this movie most definitely belongs to two woman to varying degrees.  Katharine Isabelle, famous for her role in 'Ginger Snaps', does a fantastic job as Mary Mason.  She plays the part superbly well in that her portrayal is slow and subtle to begin with and then gets a little more off kilter the more of the movie you watch.

However good her performance was, and it's very good, but she outdone by the debut performance of Tristan Risk as Beatress Johnson.  It's a wonderfully creepy and off putting performance that is so assured that I was actually shocked that this was her first feature film.  Her portrayal of the lady wanting surgery after surgery to look like a twist Betty Boop is both creepy and yet, in places, quite sympathetic.

The one thing that bugged me is how they went  to the incredibly cliched scene of having the female character sexually assaulted by one of the male characters.  When are horror writers going to realise that you don't have to stoop to that over used plot device to make your female character strong in a movie?

Other than that, this is a good horror that tries something a little different.  It doesn't fully succeed in that quest but I have seen a hell of a lot worse movies so this one is definitely worth a look at least.