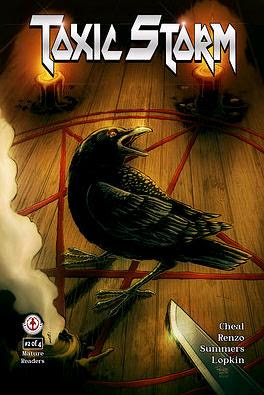 Simon Fisher, a wrongly convicted man, has escaped in a form of a toxic gas.  A maniacal cop is on his trail and only Caleb Fontana appears to have the answers but he's locked up in San Quentin prison.  Watch the pieces come together in this, issue 2 of 'Toxic Storm'.

After reading the absolutely superb first issue of 'Toxic Storm', I was literally chomping at the bit to get my geeky little hands on the second issue to see just where Adam Cheal and his team were going to take the characters next.

The first issue had a grimy, 80's feel to it and that's the same here.  I'm glad they kept with that style because it really suits the story and adds a real feeling of dread that bubbles just under the surface of the story itself.

Issue two really ramps up the tension and the action.  We get better aquainted with some of the characters here.  We get a look in to Caleb Fontana's past, a look at the maniacal Agent Storm that is chasing the escaped Simon Fisher and we even get some fab nods to the supernatural side of the story.  Cheal manages to fit all of that in while making a fast paced and exciting story that truly races along at breakneck speed.  The fact that he can maintain such a pace and still let the characters grow is a real testament to just how good a writer he is.

The dark nature of the book would be lost without good artwork but that's exactly what we have gotten here in the shape of the artist Alberto 'Renzo' Rodriguez and the colorist Mike Summers.  They do a great job of giving the art a dark and grimy feel but when it's needed, the art absolutely pops in to life near the end where the stuff hits the fan for the characters.  I would definitely say that you should check out any of the other works these guys have done if the level of quality here is anything to go by.

Once again, Mindy Lopkins has done a fantastic job with the lettering.  She seems at ease with any style that you need to make a scene literally fly off of the page.  It's great to see someone that really has such a talented eye for when to be subtle and when to use big, brash letters and that's exactly what Lopkins does here.

All in all, this issue not only lived up to the promise set by the superb first issue, it surpassed them big time.  The writing, art and lettering seem to just fit together like they were always meant to be in a comic together.  From the looks of this issue, this is most definitely a team to keep an eye and a comic to keep coming back to.

For more information on the comic and the team please go to their website that can be found here!
Posted by Pat Scattergood at 00:53