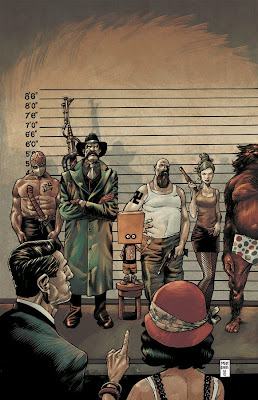 Irreverent and politically incorrect,Toddtickles every taboo in one wild ride filled with ax murderers, cults, celebrity stalkers, and a neo-Nazi prison gang.

The word dysfunctional is banded around a hell of a lot in the comic book world but for once, that term completely fits this collection of the first four issues of the critically acclaimed title from Image Comics.

This title is one of those weird ones that you can't really describe to  someone who hasn't read it yet it's definitely a title you should check out.

Basically Todd is a lad with a bag on his head, who no matter what sees the good in absolutely everything.  During the story Todd gets sent to prison for a crime he didn't commit and even there he sees the happiness and the beauty in everything.

To some that may sound like a really weird and silly idea but in the hands of Kristensen and Perker, it's made to be something that is not only hilariously funny but incredibly heartfelt as well.  You just can't help but get behind the sheer enthusiasm that the Todd character shows.  That's where the art and the writing really work together brilliantly well.  Because you obviously can't see Todd's facial expressions because of the bag on his head, the writing is what the story would hinge on but because of  the intelligent work there and the superb art showing the mannerisms of Todd as well the reactions of the characters around him, the whole release just works.

The best way to describe the title would be that it has a bit of a less flighty Tim Burton feel while maintaining it's rather unique personality.  There really isn't anything like this out there and because of that, I really can't recommend it higher.

Even if you've not heard of this title, I urge you to go out and get it.  It's well worth a read thanks to the fantastic art and writing that not only will have you howling with laughter but will also smiling at the sheer heartfelt enthusiasm of the main character.  Believe me on this one, give this collection a read and you may just find your new favorite comic book character!

Posted by Pat Scattergood at 16:34