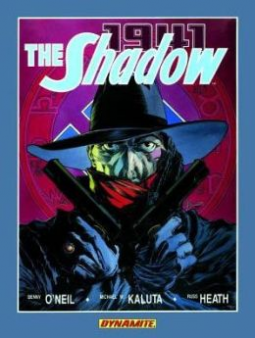 On Easter Sunday of April 1941, a young woman pushes through the holiday crowds, racing for her life through the streets of Manhattan.

It's a chase that leads from the bustling American metropolis all the way to Berlin, the dark heart of the Nazi regime... a chase of screeching taxis and motorcycle escapes, of a fantastic battle between a German U-boat and an autogyro over Coney Island!

Like marionettes dangling from invisible hands, neither Allies nor Axis agents can tell if they are the puppeteers... or the dolls whose strings get cut!  Behind it all, The Shadow looms, a master of men with cold, hollow laughter and blazing .45 pistols!

This collaboration between Danny O'Neil and Mike Kaluta has long been discussed as one of the best 'The Shadow'  stories written in the characters long history but does it still hold up today?

While I can see why people liked it so much, for me it just didn't grip me as much as I was thinking that it would do.  I suppose I was just expecting a little bit more from the story.  That said, the story does have some great twists and turns and also does a great job of recreating the era of the 2nd World War.  I liked the little bits of attention to detail in the story and the art work because that really made the story grip for the most part.

The one part I didn't like is that every now and then people would be mentioned then not mentioned again for a while.  I found that a little bit annoying in places and that  took me out of the story a little.

Art wise, this release is really well done.  If you think back to the 'Batman' comics of the late 80's and early 90's then you'll know what kind of art to expect here.  The story itself looks really good and like I mentioned earlier, the sharp eye for detail really does raise the level of the story up higher than it would otherwise have been.

Overall, this is a good release from Dynamite Entertainment.  Originally released in the 80's, it's great to see this story back in print but for some reason, it just didn't grip me as much as I was expecting it to.  However, if  you are a fan of 'The Shadow' then it's definitely worth at least having a peek at.

'The Shadow 1941: Hitler's Astrologer' is available to buy from September 17th

Posted by Pat Scattergood at 13:42