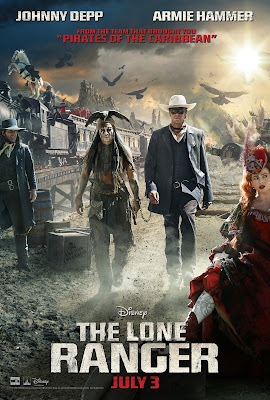 Native American warrior Tonto recounts the untold tales that transformed John Reid, a man of the law, into a legend of justice.

I have to admit that I was a little bit hesitant to go watch this movie after the complete and utter mauling that it got at the hands of movie critics.  The fact that when I walked in to the cinema and there were only about 10 people tops in there when the movie started really didn't fill me with confidence either.

Could this movie really be that bad right?

Well, the answer to that is a resounding no.  What we have here is a rollicking adventure set at break neck pace and has some absolutely fantastic performances from the cast.

The first thing I noticed when the movie started was just how beautiful the movie looked.  That's always been a bit of a trademark by Gore Verbinski and it's definitely evident here.  He really does have a keen eye for the beautiful as well as putting in a few visual nods to the western movies of the classic age of cinema.

Another thing I noticed was the superb score.  The musical cues really seemed to match up brilliantly with the action on the screen and, if I'm totally honest, it's made me want to go out and get the soundtrack as soon as I can.

I have to admit, that the performances of this movie really surprised me.  Some of the reviews butchered the cast but I really enjoyed their portrayal of the legendary characters.  One of the best of these by far was Armie Hammer as The Lone Ranger.  He really played the part brilliantly and there were some great and subtle moments throughout the movie where you really did see the character turning in to the legendary justice fighter as it progressed.

Johnny Depp was a revelation as Tonto.  I thought that maybe he was just going to rehash his portrayal of Jack Sparrow from the 'Pirates of the Caribbean' movies but that was totally wrong.  The kooky comedy and portrayal of the character is there, it is Depp after all, yet he also gives the character of Tonto a real sympathetic side as well and that's not normally seen in other 'Lone Ranger' films.

William Fichtner is just evil personified as one of the villains, Butch Cavendish.  Every time he was on screen he just exuded this grimy, evil persona and that made him impossible to look away from.  His sheer evil, sociopathic persona really worked well with Hammer's portrayal as if they really were ying and yang.

The only complaint characters wise I have is that I would have loved to see more of the Red Harrington character played by Helena Bonham Carter.  I'm not normally that big a fan of hers but her character here had a great portrayal behind it and a great back story that shows history with Cavendish.  What we have here of that back story works well, it's just that it left me wanting to know more.

All in all, I really don't see just how so many bad reviews of this movie came about.  A lot of them focus on the budget and the problems that arose because of it but that's a real disservice to the movie itself.  It's action packed, exciting and has some great performances from the cast as well as some great nods not only to past 'Lone Ranger' movies but to classic westerns too.  Well worth a  look, especially if you're a Depp fan but also worth a watch for Hammer and Fichtner's portrayals.

Posted by Pat Scattergood at 11:01