The Last Will and Testament of Rosalind Leigh Pre-Release Review 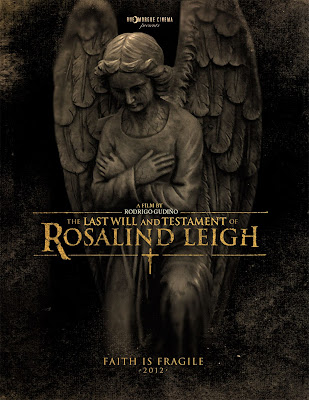 (aka 'The Last Will and Testament)

Written and Directed By Rodrigo Gudino

A Someone at the Door Productions Movie

An antiques collector inherits a house from his estranged mother only to discover that she had been living in a shrine devoted to a mysterious cult.

Soon, he comes to suspect that his mother's oppressive spirit still lingers within her home and is using items in the house to contact him with an urgent message.

When you read the synopsis for this movie, you kind of go in to expecting a bog standard, loud and brash scare filled movie as Hollywood appear to not be able to do anything that's even remotely subtle anymore.

Imagine my surprise when I watched this movie and it was the complete opposite of that.

The movie appears to have polarized viewers.  Some think it's absolutely brilliant and others think that it is complete rubbish but which camp do I fall in to?

Well, I personally thought that it was a well made, well written and genuinely spooky movie.  Considering that this is the first full length foray in to movie making for the director, I honestly think that he has made one of the best and most chilling movies I've seen in a very long time.

To call 'The Last Will and Testament of Rosalind Leigh' just a horror movie would be a massive disservice to it.  While classed as one, it came across as more of a well made psychological thriller with supernatural overtones than a full on horror movie.  It also came across as a really well written look at just what the perils of religious fanaticism can do to someone without falling in to the trap of being preachy or melodramatic.

The story itself is well paced and not only has some nice chills but also a very spooky atmosphere with a feeling of dread bubbling under the surface but that's not all.  One of the strengths of the writing is that when it first starts you hear about Rosalind in voice over only and she comes across as someone who was just crazy yet as the movie wears on, sympathy for the character starts to appear.  That's when it's revealed just what happened to her, in her own words, and the parallel between what actually happened and what they thought happened was brought to the forefront.  The way they wrote about her feelings of extreme loneliness in both life and after death was incredibly heartfelt and actually brought a lump to my throat.

However, the best part of the movie was the cast.  Most of the cast only appear either in flashes or as voices only so for the majority of the movie, it's just down to Aaron Poole as Leon to make the movie work.  This was a risky move to place the movie on one persons shoulders like that but he gives a very well portrayed performance as Leon.  There are times where you're not sure if everything is really happening or in his head and he gives that in such a subtle way that you really want to just phone the character up and tell him he'll be OK.

Posted by Pat Scattergood at 00:18