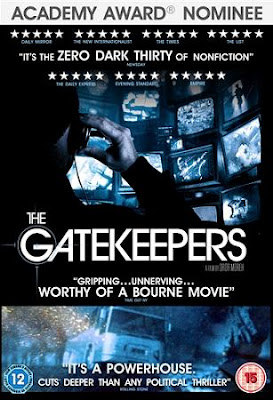 A documentary featuring interviews with all surviving former heads of Shin Bet, the Israeli security agency whose activities and membership are closely held state secrets.

Every once in a while a documentary comes along and absolutely grips from the beginning right through to the very end credits.

This fascinating look in to the workings of Shin Bet, the Israeli security agency, is one of those.  Deservedly a recipient of an Oscar nomination, 'The Gatekeepers' is a very brave movie to make.

Here the director Dror Moreh, interviews some of the people that have been in charge of the extremely private arm of the Israeli security agency and manages to ask some incredibly probing questions about a variety of subjects.  While it is true that they are showing the conflicts that the agency has been involved in from the Israeli point of view, this isn't a 'whitewash' documentary at all.  In fact, it holds no punches and isn't afraid to say when they think that the people involved made the wrong choices.

It's that approach to the admittedly delicate subject that makes this documentary well worth watching.  I, for one, didn't know all that much about the agency.  This film has made me want to know more about how they work, the things they do and much more.

Some of the interviews do come across as a little bit awkward in places but that's because of the people involved yet I wouldn't class that as a flaw because of the way it's been filmed.  The interviews sometimes start off a little awkward but with the interviewing style on show here, a slow and subtle questioning instead of the rapid fire interviews that seem popular in documentaries at the moment, the subjects being interviewed slowly open up and talk about the events in a really organic way.  That to me, raised the quality of this film higher.  It was refreshing to see interviews that solely wanted to hear the facts instead of battering  the interviewee in to giving them their next sound bite.

You'll notice that I haven't spoken all that much about the content of the interviews themselves.  There is a very simple reason for that.  I found them massively interesting so to sit  here and type about the things that were mentioned would spoil it a little for people that haven't seen this wonderful documentary and I hate reviews that do that.  I will admit that there are a couple of moments that are hard to watch because of the events that they speak about but that said, real life isn't full of roses and rainbows so there's no point sugar coating the subjects here either.

I honestly urge any of you to see this documentary.  While it is true that it's told solely from the Israeli point of view, I really was impressed with how the interviewer didn't shy away from asking the hard questions and tackling the controversial moments in the agencies history.