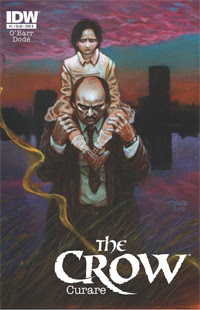 Homicide Detective Francis Joseph Salk has long put his job first costing him his wife and family.  After failing to solve the murder of a small girl, Salk beats himself up daily and it's driven him to the edge of his very sanity.

That's when the girl appears accompanied by a crow and everything changes.

James O'Barr's original 'The Crow' story is a unique breed of graphic novel / comic book series in that despite the subject matter and the violence that it breeds, it still manages to to be a thing of beauty.

There have been many different versions of 'The Crow' and many different comic book series featuring the same sort of outline.  Some of these have been written by O'Barr himself, like 'Skinning the Wolves' and others  haven't but all have been met with varying degrees of success.

As a big O'Barr fan, I was eagerly awaiting the next story by the creator himself and it didn't disappoint.  In much the same way as the earlier 'Skinning the Wolves' series, O'Barr doesn't shy away from anything and most definitely doesn't pull any punches with his subject matter.  In 'Skinning the Wolves' the subject matter was the Holocaust during World War 2 and here it's the murder of a little girl.

Is the story of a Homicide Detective haunted by his lack of success in solving a crime a new and original idea?  Not in the slightest.  Yet in O'Barr's more than capable hands, the story practically takes on a life of it's own.  It's got a dark, grimy feel to the dialogue and even though it sometimes reads as a supernatural version of 'Law and Order: SUV' at times, O'Barr's knack for making even the most supernatural events seem completely plausible.

It's the same with the positively superb artwork by Antoine Dode.  Dode gives the story a really grimy and slightly off kilter feel to it and that helps to keep the reader feeling hooked in to the story yet at the same time, continues to make them slightly uneasy.

'The Crow: Curare' issue one is best seen as a set up issue and it sets the characters and the storyline up in a superb way.  O'Barr makes the characters seem so destitute and despairing that the sadness literally oozes from the pages.  That's brilliantly accompanied by Dode's art.  A few reviews have said that his style isn't right for the series but I highly disagree.  I think his work is superb and really makes the story look like a grainy movie and I liked that about this issue.

If you are a fan of 'The Crow' or of James O'Barr then I highly urge you to get this title, if you haven't already got it.  If you're not then it's still definitely worth a look because despite it's dark subject matter, it's written very well and has some fantastic art work.