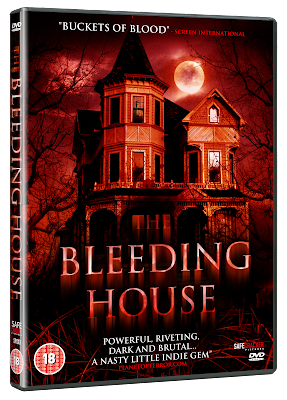 Written and Directed By Philip Gelatt

A stranger with mysterious intentions comes to stay the night at a secluded country home, but what he finds inside is a family torn apart by a violent past and a secret more deadly than he expected.

I have to admit that when I saw some of the brutal reviews of this movie, I wasn't really all that sure what to expect from this.  You know what I ended up with?  A movie that a lot of critics appear to have misses the point of.

The slow and subtle pacing of the movie does a hell of a lot to add to the general feeling of uneasiness that permeates throughout the whole movie.  In fact, the subject matter of the movie teamed with the subtle pace really does a great job of making the viewer uneasy.

At the beginning of the movie you are basically watching a family that appears to be a bit strange but you're not really sure why.  That's when Nick turns up to stay at the house and things become clearer, back stories are revealed but then we are treated to some superb twists and turns.

Performance wise, there are some great moments here because of how the cast portray their characters.  The best of these is Patrick Breen as Nick.  Even when things start to kick off, his Southern gentleman stick makes him sound completely normal but then you listen to what he is actually saying and you realise that he is absolutely bat sh*t crazy.

The filming style, along with the make up effects, give this movie a dark, grimy look alongside a 70's / 80's feel and that adds to the atmosphere full of dread that is already prevalent through out the movie.  This is the most evident on the murder scenes.  The flashes of violence look more shocking because of the filming style and make you feel like you are involved in the lives of these people.

In my opinion, this is definitely a horror / psychological thriller that is well worth picking up.  The dark and dirty filming style, teamed with some off kilter writing and performances make this one of the best of the recent spate of 'home invasion' movies by far, just ignore the low score on IMDB because it really is so much better than the score makes you think it will be.

'The Bleeding House' is available to buy from 26th August 2013

Posted by Pat Scattergood at 15:37