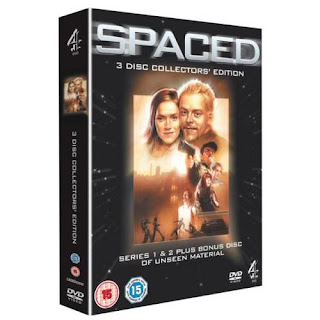 The complete collection of Spaced!

Simon Pegg and Jessica Stevenson are Tim Bisley and Daisy Steiner - two hopeless twentysomethings sharing a flat and pretending to be a couple. Joining them on their urban adventures are wine-swilling landlady Marsha, the rather intense artist who lives downstairs Brian, Tim's best friend and would-be TA soldier Mike, and Daisy's best friend, the air-headed Twist. Together they tackle the big questions that the 21st century poses: who are they, what they mean to each other and who should switch on the kettle?

Spaced is the definitive cult television show. Running for two series on the Channel 4 station, the show created a loyal and obsessive band of fans.

It's easy to see why. The comedy here is broad but also takes shots at every kind of pop culture possible. Comic books, television shows, movies, everything. Nothing is safe from their razor wire wit.

Simon Pegg and Jessica Stevenson give absolutely star making turns as Tim and Daisy. Two twenty somethings who are in desperate need of a flat. When one comes up, they concoct a plan to pose as a couple in order to get the place.

The relationship between the two of them is played brilliantly. While yes there is a 'will they won't they' theme going on, that's not the main part of the story. In fact, it's pretty much a background thing. The main part is the growing friendship between the pair and the myriad group of friends that they pick up along the way.

The best of these friends is, by far, the wannabe TA Soldier Mike. Tim's best friend from when they were children, Mike is incredibly unhinged yet sweet at the same time. The best moment of the entire collection however belongs to Mike. The group of friends have all gone to a nightclub for a night out and Mike manages to get the entire club dancing and 'throwing shapes' to a remix of the A-Team theme tune. That part, and many others, had me literally crying with laughter.

The special features here are some of the best that I have seen in a television release in a long time. Every single part of the creation process seems to have been covered and yet not once was I bored by any of the things here, in fact I found them entertaining.

All in all, a great set for a great television show.

Posted by Pat Scattergood at 14:41