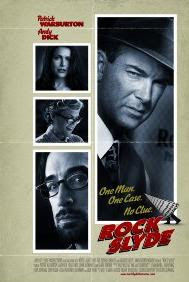 Written and Directed By Chris Dowling

When a down and out detective is offered a case, he clashes with a religious cult who want to take over his office.  In a battle of wits with a distinct lack of brain cells, Rock Slyde has to stay one step ahead of the religious guru, Bart.

As  a big Patrick Warburton fan, I was surprised to find a movie of his that I only hadn't seen but hadn't even heard of either.

In this, a spoof of the film noir era as well as a satirical lampoon of Scientology, Patrick Warburton plays the titular private detective, Rock Slyde.

Narrating the movie like a drunken Raymond Chandler character, the laughs come thick and fast.  It's true that not all of them work but for the most part, this is a really funny comedy.  A few of the jokes at the expense of Scientology are a tad heavy handed but there are some moments that had me howling with laughter.  Most of that is thanks  to Warburton's performance.  He delivers his dialogue, no matter how silly it sounds, in such a droll and cynical way that you can't help but at the very least smile.  My personal favourite of these was when he was explaining to his employer that he couldn't date her because of growing up watching 'Soul Train' or his secret past as a gay pirate in a gay porn musical.

The rest of the cast do a pretty good job as well.  One of the things that surprised me the most about this movie was the fact that while it had Andy Dick in it, who I have nearly never found funny, is actually quite funny here and plays the perfect counter foil to Warburton's character.

If you watch the movie there are some fantastic cameo appearances from people such as Jason Alexander as a gay postman that recognises Slyde from the pirate movie, Jerry Cantrell from Alice in Chains and Eric Roberts as a deliveryman.  The best of these being Roberts by far.

The only part of the movie I didn't like was the German character as it just seemed out of place.  I wouldn't have minded if there was a point to have him be German yet the only reason for him to be there was for him to talk in a fake German accent.  They could have done a hell of a lot more with the character that would have made him much funnier but alas, at least the rest of the movie is funny.

All in all, this is a very funny movie.  Not all of it is successful but for a low to mid budget comedy, it's actually quite successful.  Plus if you don't walk away from the movie seeing the 'Swashbuckle Me' song then, to be honest, you have no soul.

Posted by Pat Scattergood at 23:37