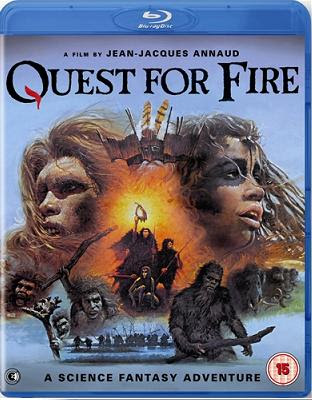 Written By Gerard Brach Based on the Novel By J.H. Rosny S.R.
Directed By Jean-Jacques Annaud

80,000 years ago a primitive tribe deperatley guards its most valued possession, fire. They know how to tend it, how to use it, but its creation remains a mystery. During an attack by a neighbouring tribe their flame is lost and so begins an epic, obstacle-filled quest to find another source of the element so precious in their struggle for survival.

Jean-Jacques Annaud's multi-award winning film is an extraordinary view of the dawn of man and a true orginal.

I had heard many amazing things about this movie but for some reason had watched it once when I was younger and then pretty much forgot about it.  When I was offered the chance to review the newly released Blu-ray of the movie, I positively jumped at the chance.

Here was a movie with such  a reputation as being one of the classics of cinema that I couldn't help but be majorly excited to stick the disc in and get watching.  Plus, considering that it has Ron Perlman, in his debut role, appearing in it as well then there was really no way in Hell that I wasn't going to check this out.

However, there was a tiny part of me that was wondering if there was any way that this movie could possibly live up to it's heavy duty reputation.  I need not have worried because not only does it live up to it, it ends up being completely gripping to me, as a viewer.

The story here sounds relatively simple.  When a tribe loses it's only way of making fire, essential for their survival, in an attack by another tribe they began to fear for their lives.  Three of the tribe are sent out to find a way of creating fire and the movie pretty much tells their story.

On paper, that may sound like a simple story but under the expert eye of the director, Jean-Jacques Annaud, the movie is so much more than that.  In fact, and I don't use this term very much, I would say that it's the masterpiece of his career.

I can't really say much about the story itself through fear of spoiling it for the other viewers but believe me, there are so many layers to it that you could easily watch it many times and see something new each time.  It's one of those movies that most definitely holds up to repeated viewings and that is quite a rare thing in the day and age of style over substance that seems so evident in today's movies.

Another thing that really gripped me were the absolutely amazingly powerful performances by the cast.  I can honestly say that I don't think there is a weak link amongst them because they play their parts so well.  That's mostly evident by the strong and moving performance by Ron Perlman.  Watching this movie, you really wouldn't believe that this was his first ever movie.  He just portrays the character with such assurance and skill that it was almost as if he'd made hundreds of movies before this one.

On a side note, the language that the tribes use during the movie was created by Anthony Burgess, author of the controversial novel 'A Clockwork Orange' that was adapted in to an equally as controversial movie by the late, great Stanley Kubrick.

The special features here are some of the most interesting that I have seen on a movie release, especially on a release as unique as this one.  Like the movie, they would definitely hold up to repeated viewings and it's the same with the two commentaries here.  They manage to go in to so much detail that no stone is left unturned yet they do that without overloading the viewer.  My favourite of the two was the commentary with the actors, especially when Perlman was speaking because he really seemed proud of the movie and so he should be.

For once, the word masterpiece really is deserved by a movie.  One of the most unique, interesting and incredibly beautiful movies that I have ever had the pleasure of seeing and one that is well deserving of it's reputation as a classic.

Posted by Pat Scattergood at 13:12