Heroes in the Night: Inside the Real Life Superhero Movement By Tea Krulos Review 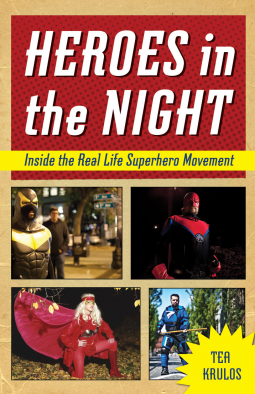 
On a frigid March night, journalist Tea Krulos shivered in a Milwaukee park, waiting for a masked crimefighter. Finally the Watchman arrived, not in a Batmobile or swinging from a web, but driving a tan four-door Pontiac. He was in costume, of course—a trench coat, motorcycle gloves, army boots, a domino mask, and a red hooded sweatshirt emblazoned with a W logo. The two had spoken before on the phone, but never face-to-mask. By the end of the interview, Krulos wasn’t sure if the Watchman was delightfully eccentric or completely crazy. But he was going to find out.

Heroes in the Night traces Krulos’s journey into the strange subculture of Real Life Superheroes, random citizens who have adopted comic book–style personas and hit the streets to fight injustice—helping the homeless, gathering donations for food banks, or patrolling their neighborhoods looking for crime to fight. By day, these modern Clark Kents work as dishwashers, pencil pushers, and executives in Fortune 500 companies. But by night, only the Shadow knows.

Well, the Shadow and Tea Krulos. Through historic research, extensive interviews, and many long hours walking on patrol in Brooklyn and Seattle, San Diego, Minneapolis, and Vancouver, British Columbia, Krulos discovered what being a RLSH is all about. Heroes in the Night profiles dozens of RLSHs and shares not only their shining, triumphant moments but some of their ill-advised, terrifying disasters as well.

The Real Life Superhero Movement.  A movement that has both garnered a lot of interest and an equal amount of mockery.  I wasn't all that sure of what to expect from this book if I'm completely honest.  Was it going to be a straight up look at the lifestyles of the people that want to be the real life superheroes of the world or would it be a mocking look at them?

Well, what we have a is a little bit of both.  Krulos takes a well written and intelligent look at this people and tries to get under their skin in order to see what makes them tick, what makes them want to be superheroes.  In fact, Krulos manages to blend the factual and exciting side of things with the humour in some of the funnier characters that appear along the way brilliantly.  That really helps the easy going flow of the book and creates one that you can't stop reading.

Some of the stories here are absolutely fascinating and really gives the reader a good insight in to why people feel the need to put the costumes on to act out their superhero fantasy out in the real world.  Some are doing it to somehow right the wrongs in the world in their own little way.  Some are doing it to fill some sort of void that they feel inside themselves.  Others, well, others just seem to be doing it as they have nothing else to do.

'Heroes in the Night' is available to buy from October 1st

Posted by Pat Scattergood at 14:39