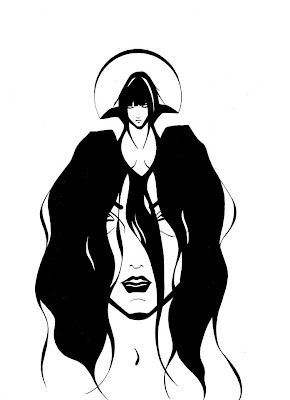 It’s 2034 and America is run by the church, at the hands of Father Augustine, a malevolent preacher intent on eradicating sin and punishing the non-believers.  Those who do not follow the strict moral code of the Return to Zion Act of 2024 are marginalized, oppressed and relegated to the ghettos of America.

Marceline Jones, an unwed mother, suffers an unbearable loss as a result of the stigma of having an illegitimate child, and is imprisoned after committing a brutal, yet ultimately unsuccessful, crime of revenge.

But the universe opens a door for her, and she escapes with two members of the resistance movement, Erebos.  They recruit her and she is offered a deal:  the chance to finish the job she started and avenge her loss, in return for her services as an assassin for the underground.

The story chronicles her descent into a world of violence, political intrigue and spiraling madness, as she works to exact her revenge.

Billed as a graphic novel, this actually reads more as an illustrated novella than a graphic novel but that's a minor nitpick when you consider just how good this novella is.

'Fury (Conception)' is a rare story in that it can be read in many different ways no matter how many times you have sat down and read it.  That's one of it's main strengths.  The story itself can be read as a thriller with religious overtones because of how it centers around a world run by religion.  It also reads as a revenge story complete with well written characters and motives.  At the same time, it can read as an action story with one  foot in the here and now and the other in the near future.  It's the sort of story that each person that reads it will take a way a different interpretation from it.

The action and the story on the pages here absolutely come to life thanks to Bresner's easy going style.  She has an uncanny knack for pulling the reader in to a scene and then without warning something happens and it really hooks you in to seeing just what is going to happen next.  I have to admit that I couldn't honestly put this novella down and that's quite rare for me.  Normally with a story I will read a bit then come  back to it but with this one that didn't happen.  I wanted and needed to see just what was going to happen to Marceline.

Talking of Marceline, I loved how Bresner didn't just make her stereotypical action girl.  Instead she's deeply flawed yet with a sympathetic edge to her no matter what dark and sometimes twisted things are happening to her, are being done by her and much more.  That said, this isn't one of those stories that just lives and dies by the main character, it's a densely populated world with some absolutely brilliant characters that really make the story come to life.

The art and layout used in the novella are honestly, beautiful.  They're stark, fantastical and yet they fit the story like a glove.  In fact, I would even go so far as to say that I really wouldn't be able to imagine one without  the other.  If the art in this release is anything  to go by then Bresner is definitely a name to keep an eye out for.

I really can't recommend this release from Nicole Bresner higher.  I would even go so far as to call it an essential purchase and I don't say that about many things on this site.

You can purchase 'Fury (Conception)' from here!
Posted by Pat Scattergood at 12:26