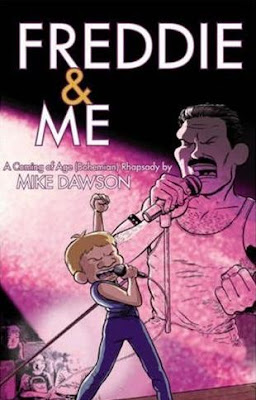 
Freddie and Me is a wonderfully funny and moving graphic memoir of Mike Dawson’s lifelong obsession with Freddie Mercury and Queen.

Told alternately from Mike’s childhood, teenage and adult perspectives, Freddie and Me explores the way in which music changes and shapes our lives, and the way in which random memories can both prop up and undermine the stories we tell ourselves.

The counterpoint toMike’s obsession is his younger sister’s love of George Michael and Wham –including several deliciously funny imagined scenes featuring a post-break-up Andrew Ridgeley – which, like the book as a whole, is written and drawn with a brilliant combination of exuberance and subtlety.

Here Mike Dawson has crafted a graphic novel about his life, his childhood and his obsession with the legendary rock band Queen.

Told in black and white and in short bursts, this graphic novel is strangely enjoyable. As well as the scenes of his life, he has also included imagined scenes involving some of the bands of the time such as Wham. This scenes are a bit hit and miss humor wise but mostly work.

The short story like moments of his life here are told in a competent manner but there are flashes of beauty and some absolutely hysterical scenes that had me nearly crying with laughter.

The scenes between Dawson and his sister show so many moments of sibling relationship and infighting that it really reflects the real life moments with brothers and sisters.

The artwork itself is stark in it's black and white nature but it works with this story, especially the scenes involving his hero worship of Queen and in particular Freddie Mercury. I absolutely loved these scenes and for me, they made it worth the cheap price of the book on it's own.

While a bit hit and miss, it's still a good and humorous look at a life full of love and loss as well as the writers obsession with his favorite band.

Recommended although probably more for Queen fans more than others but give it a go. Considering the cheapness of the price of the book, it could be worth giving it a go.