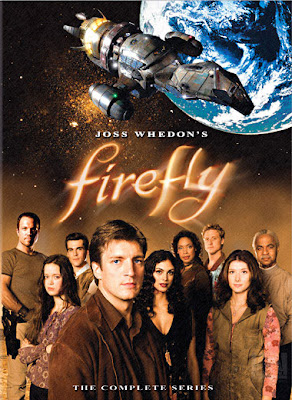 
Five hundred years in the future there's a whole new frontier, and the crew of the Firefly-class spaceship Serenity is eager to stake a claim on the action.

They'll take any job, legal or illegal, to keep fuel in the tanks and food on the table. But things get a bit more complicated after they take on a passenger wanted by the new totalitarian Alliance regime. Now they find themselves on the run, desperate to steer clear of Alliance ships and the flesh-eating Reavers who live on the fringes of space.

Firefly was a series with a great mix of comedy and action, while still having an emotional heart to the stories. Sadly however it only ran for one season but what a great season it was.

Written and created by Joss Whedon, the creator of the ‘Buffy The Vampire Slayer’, ’Angel’ and ’Dolls House’ television shows, the quality of the writing shines through the entirety of the season. You care about the characters, the stories are exciting and Whedon’s trademark wit is there in abundance.

With such a short season there’s no let up in the excitement with the stories. The pilot episode is slow starting to begin but that gives the backstories for the characters enough time to develop without feeling too rushed.

The acting is very well done and there is a great chemistry amongst the lead characters. That really helps to show the sense of family that the characters have about one another. One facet that I like is that while Mal Reynolds, played by Nathan Fillion, is a wisecracking smart ass, there’s a bit of a darker and more cynical side to him as well. I like the fact that his character has lots of different levels.

All in all a great collection of episodes.

The sound is fantastic on this collection, especially on the action scenes. The sound effects pop with such clarity that it really adds an air of excitement.

An absolute plethora of extras just serves to underscore just how good a collection this is. One of the best sci-fi shows in recent years is given a great collection that’s worthy of its reputation amongst sci-fi followers. A mix of humor, ala ‘Red Dwarf’ and balls to the wall action, make this one that is a definite must have.
Show 5/5
Picture 4.5/5
Sound 4/5
Special Features 4.5/5
Overall 18/20

Posted by Pat Scattergood at 15:39