Double Life: A Love Story From Broadway To Hollywood By Alan Shayne and Norman Sunshine Review 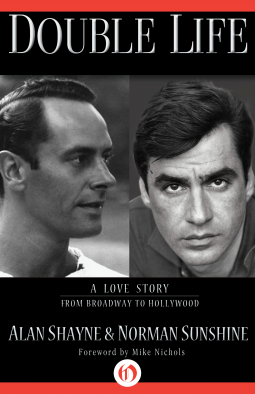 Gay marriage is at the forefront of America’s political battles.

The human story at the center of this debate is told in Double Life, a dual memoir by a gay male couple in a fifty-plus year relationship. With high profiles in the entertainment, advertising, and art communities, the authors offer a virtual timeline of how gay relationships have gained acceptance in the last half-century.

Double Life is a trip through the entertainment world and a gay partnership in the latter half of the twentieth century. As more and more same sex couples find it possible to say “I do,” the book serves as an important document of how far we’ve come.

I absolutely love reading memoirs of all kinds.  Doesn't matter if the person writing it is in films, music, an author or anything else.  I just love to read why people live the way they do or why they do the things they do.

This one by Alan Shayne and Norman Sunshine and chronicles their long life together and really tells a great story of just how far the world has come with accepting gay marriage and to be honest,  it's about time.  I'm of the firm belief that a person should be able to love who they want regardless sexual orientation or race.  Love is love and that's exactly the point that this memoir is trying to make.

One of the best lines in this memoir is when they say that they were "gay before it was fashionable" and it's that gentle humor that makes this book so endearing.  The best parts of the memoir was when they were just talking about themselves and the story of their love affair.

When the book veers in to celebrity gossip, it just doesn't grip nearly as much as it does when it's just talking about Norman and Alan.  Don't get me wrong, those little stories are interesting, it's just that their story is much more interesting.

One of the things that you end up taking from this book is that no matter what they had to go through in their lives, this is a story of two people that love each other.  What more could you want from a love story?

Posted by Pat Scattergood at 01:35