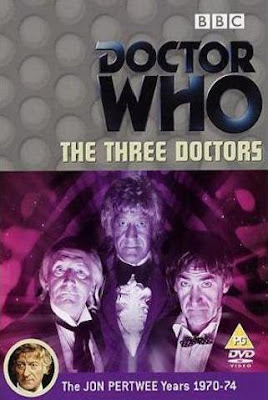 
A gel-like plasma creature arrives on earth and hunts down the Doctor, who calls on the Time Lords for help.

The Time Lords themselves are in crisis as their energy is being drawn off into a black hole. They send the Doctor's earlier selves to join him.

The first Doctor, caught in a time eddy and able only to advise, deduces that the creature is a time bridge. The third Doctor and Jo then give themselves up to it and are transported to a world of antimatter beyond the black hole.

On Earth, the second Doctor is forced to take refuge in the TARDIS along with the Brigadier and Sergeant Benton. He switches off the ship's force field, and the whole UNIT building is transported through the black hole.

Behind these events is Omega, a figure from the Time Lord history whose solar engineering provided the power for time travel. He has been trapped in the black hole ever since and now wants the Doctor to swap places with him, but it transpires that the corrosive properties of his domain have already destroyed his physical form, leaving only his will. He threatens to destroy the universe.

Jon Pertwee has always been my favorite version of The Doctor and this tale is no different.

This four part story pits three incarnations of The Doctor against a omnipotent being named Omega. After sending a series of gel like creatures after The Doctor, the Timelords are summoned for help. Their race is unable to help as they are dealing with a black hole but they send the other two doctors to help.

Also the chemistry between Troughton and Pertwee is fantastic and really shines off of the screen. The only weak point of the tale is Jo as she doesn't really seem to do much but other than that she gave a relatively good performance.

The story itself is one of the best of the classic series and the writing really lends an air of grandeur and menace. It's the same with the direction. The use of shadows and darkness is masterful as is the inventive use of echoes.

As always the special features here are the cream of the crop and really complete the collection in a great way. My favorite being the interview with Patrick Troughton as I've never actually seen one with him before so that was a nice treat for a Doctor Who fan like myself.

While Genesis of the Daleks is the best known of the classic serials, this is definitely up there in the top five at least.