Doctor Who: The King's Dragon By Una McCormack Review 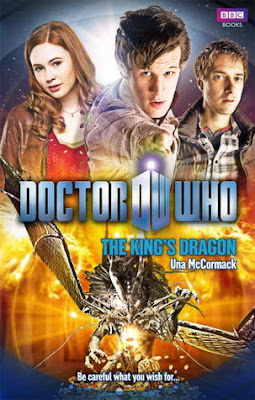 In the city-state of Geath, the king lives in a golder hall, and the people want for nothing.  Everyone is happy and everyone is rich.  Or do it seems.

When the Doctor, Amy and Rory look beneath the surface, they discover a city of secrets.  In dark corners, strange creatures are stirring.  At the heart of the hall, a great metal dragon oozes gold.  Then the Herald appears, demanding the return of her treasure...And next come the gunships.

The battle for possession of the treasure has begun, and only the Doctor and his friends can save the people of the city from being destroyed in the crossfire of an ancient civil war.  But will the King surrender his new-found wealth?  Or will he fight to keep it...?

When I read the synopsis for this story, I have to admit that I was really looking forward to reading it.  I've read quite a few 'Doctor Who' novels in my time, some great and some awful yet never read any of the ones featuring the Matt Smith version of the Doctor.

While the story did move along at  a cracking pace and I even felt hooked in to the story itself more than once.  There just seemed to be something missing.

One of the things I noticed were the characters seemed a little bit off and slightly unfamiliar from their television counterparts.  That was especially true of the Amy and Rory characters.  They seemed a little too childish and in all honesty, a bit too bitchy at times.  It was the same with The Doctor.  There were a couple of moments for the iconic BBC character that just didn't seem in character for him.

Another thing that bugged me a bit was the fact there seemed to be quite a few scenes of them just staring at the gold.  It seemed like they were there merely to pad out the book a bit.

Other than that, the story really did run really well.  The ending was pure Doctor Who goodness and wouldn't seem out of place in an episode of the show itself.  It's just that the couple of minor flaws took me out of the story a couple of times and that's a shame because McCormack is a very good writer.

If you are a diehard Doctor Who fan then this is definitely a book worth picking up.

Posted by Pat Scattergood at 14:01