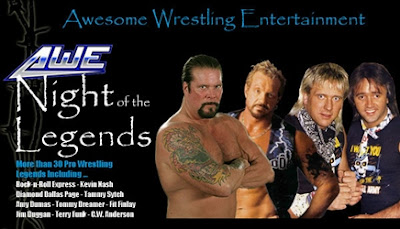 Join the AWE as we are treated to matches featuring some of the biggest legends in the world of professional wrestling for one special night!

I'm a complete glutton for punishment.  That or I'm a complete idiot.  There can be no other reason for having sat down to watch this abomination of a pay per view.  I can't even call it a wrestling pay per view because I'm not even sure if you can call what's on offer here wrestling.

First up we have Terry Funk fighting Tommy Dreamer.  Yes I know how truly broken down Terry Funk is but I figured in a no DQ match, especially one with Tommy Dreamer, he should at least be able to hit people a couple times with chairs or throw a few punches at least but no.  We get a match that only lasts 4 minutes but it feels like 30.  The pacing is slower than a snail and some of the action, if you can call it that, looks so weak it's almost laughable.  When Tommy Dreamer finally pins Funk, it feels like a relief.

After the match we're very 'kindly' treated to some highlights of the match that has only just finished.  Yeah, thanks for that guys, I was trying to wipe it from my memory.

The second match is Sonjay Dutt and Jamin Olivencia.  While I really don't like Olivencia, I thought that Dutt could at the very least get a passable match out of him.  Well, I was wrong there.  It's nowhere near as bad as the Funk / Dreamer match but neither is it anything majorly worth watching either.   Olivencia picks up the win thanks to a nefarious kick to the groin.

Next up is CW Anderson vs Perry Saturn. Despite the poor quality of the first two matches I was kind of looking forward to this one as it was great to see Saturn making a comeback.  To be perfectly honest, the story of Saturn falling on to some tragically hard times and becoming  homeless is much more interesting than the actual match itself.  The best way to describe the match would be that it wouldn't be out of place on one of the television shows that ECW would put out in it's dying days.  Saturn won with a rather sloppy looking roll up.

That's when we were treated to a match between Mohammad Akbar, in one of the worst and most xenophobic gimmicks I have seen for a long time, against one of the most patriotic characters in wrestling history in the shape of 'Hacksaw' Jim Duggan.

Well, I'm not even sure if what we saw was a match or not because all it basically was in the grand scheme of things, just Hacksaw going through the motions until he could hit his famous clothesline finishing move for the win and that was it.

At least Duggan looked like he was enjoying himself out there, I, on the other hand, was not.

Next up is a match between the up and coming wrestler Alex Silva and the battling Irishman Dave Finlay.  I've always been a fan of Finlay's in that he was always a no nonsense wrestler.  He'd come out, kick ass and go.  What we ended up with was a match with a hell of a lot of rest holds and stalling before Silva hits Finlay with a low blow and rolls him up.  The one thing I noticed the most was the fact that Silva came out to the ring with Tammy Sytch, aka Sunny in the old WWF, and boy has she not aged well.

We have a match between midget wrestler named Short Sleeve Sampson, who raps and a guy with a voodoo gimmick named Abo Shango.  To be perfectly honest, this awful attempt at a comedy match sucked even the smallest bit of enjoyment from this show out of me.  Sampson won with a frog splash.

Finally, and all I can think of is thank God for that, is the much advertised main event between Kevin Nash and his mystery partner, who turned out to be Diamond Dallas Page, against the Rock 'n' Roll Express.  This has seriously got to be one of the worst and sorriest excuses for a main event I have ever seen.  First the match is so slow and plodding that I could have gone to make dinner and come back before they'd even done a move.  That's when the partners got thrown out of the match and it turned in to Morton and Nash on their own.  That made the match even worse, which I didn't even think was possible!  After stopping to cut a promo in the middle of the match, Nash then proceeds to walk out and Morton wins the no DQ match by countout.

Well, that was the end of that and all I can say is that I am more than glad that it was over.  This has seriously got to be one of the worst wrestling shows that I have ever seen and I have seen a hell of a lot of awful shows.  I think it's going to be a long time until I find one as bad as this.