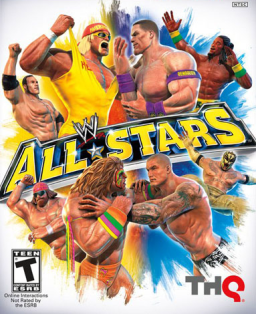 INCOMPARABLE ROSTER – Delivering one of the greatest rosters ever assembled in a WWE videogame, WWE All Stars will include WWE Legends and WWE Superstars such as John Cena, The Rock, Andre the Giant, Big Show, Triple H, Bret Hart, Ricky “The Dragon” Steamboat, Rey Mysterio and for the first time ever in a THQ/WWE videogame, “Macho Man” Randy Savage. Each WWE Legend and WWE Superstar will boast a distinctive and highly stylized appearance, adding to the overall atmosphere and intrepid attitude exuding from the on-screen action.

ORIGINAL GAMEPLAY STYLE – Bridging generations of WWE enthusiasts and casual followers alike with a fun, intuitive and approachable gameplay style, WWE All Stars will create a highly competitive environment and an engaging spectacle. Packed with high-flying and hard hitting action, players will explore a variety of responsive quick and strong grapples, standing and running attacks, as well as combination sequences. Every WWE Legend and WWE Superstar will be equipped with individual abilities, signature moves and renowned finishers to create the ultimate experience.

DISTINCT CHARACTER CLASSES – Offering four classes of competitor – Acrobat, Big Man, Brawler and Grappler - WWE All Stars will provide players with WWE Legends and WWE Superstars who have distinct advantages and techniques to which other classes do not have access, including specific combinations and unique abilities.

FANTASY WARFARE – Setting up the notion that the greatest matchups in WWE history may not have happened yet, Fantasy Warfare will see players pick a side – WWE Legends or WWE Superstars – and compete in a series of fantasy matches that pit WWE talent with similar personal or physical attributes against one another to see who is the greatest of all time. Informative and engaging video packages will set up each of the pairings and match objectives.

I have to admit that I loved the old school style arcade games that you could go in to an arcade and play.  Button combinations would unlock loads of flashy moves, you'd have a roster of wrestlers and just be able to sit up and have some fun battles.

When I read that THQ were going to do an old school style arcade game for the XBox 360 and Playstation 3, I was instantly hooked to play it.  You have some of the biggest names of yesteryear here in the shape of the legends and you have the stars of today.  There's over the top game play and cartoon style graphics so surely this is going to be an absolute blast to play right?

There are quite a few things to like here.  You have all the old legends such as The Ultimate Warrior, 'Macho Man' Randy Savage, Hulk Hogan and many more as well as the recent stars such as John Cena, Randy Orton, The Miz etc.  The roster itself is a pretty good mix of old and new.

Yet it's the roster that causes a few of the problems.  Most of them seem to all have the same moves and all move the same way.  That's a shame because it means that the matches can actually come across as a bit repetitive at times.

Talking of game play, I can't put it any other way that it's very infuriating at times.  It's a case of hit  the buttons and hope for the best.and that's part of the problem.  You can spend most of the match kicking the daylights out of your opponent only for him to hit a couple of moves and beat you.  Then in the very next match, it's super easy to defeat them.  There seems to be no rhyme or reason to it all. 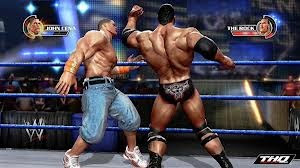 Graphics wise, the game looks fantastic.  Yes it's massively over the top and looks like an insane cartoon yet it works with  the crazy moves that you can pull off during the matches.

There are quite a few different types of matches you can take part in, there's a storyline mode, even a mode where you can pit a legend against his recent day counterpart so there's a lot here for the fans out there.  If you can get past the hit and miss A.I. in the game then there really is a lot for the fans to do.

All in all, I wouldn't say this was a bad game but at the same time, I wouldn't say it was a massively good one either.  The best way I can describe it as is that it's a good time waster to pick up, have a couple matches and then put it back down again.  It's kind of a shame it's not better than it is because there was a hell of a lot of promise behind the title.

Posted by Pat Scattergood at 13:40