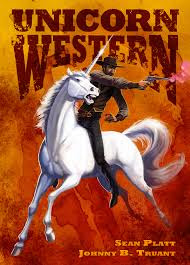 Written By Sean Platt and Johnny B. Truant

Published By Realm and Sands

Cast out from the magical kingdom of The Realm and into the dying desert of the Sands beyond, Marshal Clint Gulliver and his unicorn Edward have finally found peace in the small and dusty town of Solace. For the first time since leaving The Realm, Clint has dared to be happy, getting hitched to his bride to be, Mai. But when the town faces a deadly approaching enemy, the gunslinger feels compelled unholster his seven-shooters to face it... and the dark magic it brings with it.

From the creators of Yesterday's Gone (Platt) and Fat Vampire (Truant) comes this reinvention of both the western genre and unicorn lore. Written for children and teens -- but complex and awesome enough for adult readers -- Unicorn Western is "Harry Potter without wizards, with gunslingers, with talking unicorns and epic unicorn fights, and with more turkey pie."

A Western saga involving a sheriff riding a unicorn?  In all honesty that could have gone either way.  It was either going to be an entertaining, exciting read or it was going to be absolutely awful but which camp did this story mosey on in to?

That is most definitely in the entertaining section.

I wasn't really sure what to expect when I downloaded this on to my Kobo E-Reader.  The synopsis, like I said earlier, made me think that this was either going to be awesome or awful but I found myself completely hooked in to the story.

The one flaw that I noticed was the simple fact that because I was so hooked in to the general weirdness of the combination that I really wanted to know more about the characters here.  There is some back story mentioned for them but it's not really all that detailed.

That said however, the fast pacing is also one of the things that really works for this story yet also something weird happens.  The combination of magic and unicorns being dropped in to the middle of a Western setting actually works.  The characters seem to just accept the things that happen as completely normal and that really hooks the reader in to the action and the story itself.

The joking and insulting relationship between the unicorn and the sheriff had me absolutely howling with laughter many times and made the story really flow very well.

Considering I downloaded this for free for my E-Reader just because it sounded so absurd that I wanted to see what the hell it was about, it was massively entertaining.  I enjoyed the story and the relationship between the characters and the fast pacing really worked.  It's most definitely well worth at least giving it a look.  I'd class the book as one of those 'so strange you have to look' kind of purchases.

Posted by Pat Scattergood at 13:20