The World of Liberace DVD Review 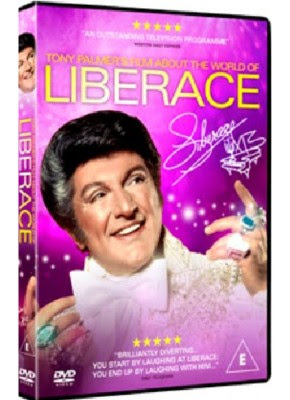 In 1976 the pianist, entertainer and one of the biggest stars of the day, published a coffee table book about his collection of homes, jewellery and costumes called The Things I Love.

This DVD is nothing more-nor-less than precisely that, as told to the acclaimed film-maker Tony Palmer...

Liberace himself takes us on a guided tour of his Hollywood and Palm Springs homes and his treasured possessions. A celebrated connoisseur of antiques, Liberace tells us about the origins and restoration of his extraordinary collection of Crystal Chandeliers, Rugs, Furniture, Automobiles, Pianos and of course the Gold Candelabras!

He talks about the costumes, jewellery and sense of theatre that earned him in his lifetime the title of 'Mr Showmanship'. Within a very few years, Wladziu Valentino Liberace sprang from West Allis, Wisconsin, to become America's first television matinee idol and one of the most successful nightclub performers of all time.

He popularised 'classical music' for the general public, and earned the kind of devotion and admiration that became the envy of many, more 'straight', performers. But to do this he worked phenomenally hard, was a devoted family man and above all an accomplished pianist...

Liberace is a larger than life legend and a man who brought glamour back in to music but could this documentary do him justice?

Well, the fact that it's directed by Tony Palmer should tell us the answer to that.

As a companion to Liberace's book 'Things I Love', you would think that a documentary of a showman showing all of his belongings would be boring but it's really not.  In Tony Palmer's legendary hands, the subject of Liberace, his shows and all that he owns comes across as truly engrossing.

There seems to be a feeling of fragility and honesty to Liberace here.  He genuinely seems incredibly happy and proud to be telling you all about his life and why he has certain things in his homes.  There is a story behind each little item,  costume and even piece of furniture that it really becomes so interesting to hear it all.

One of the things that I really liked about the documentary was that even though Liberace is a showman of the highest order, the whole thing comes across as bare bones and without feeling glossed over or clinical.

The fact that Liberace's performances punctuate proceedings is a real treat as well.  He was and always will be one of the best piano players that the world has ever seen and that's massively evident here.  Some of the performances really show just how much fun the man would  have while on stage and shows the fantastic and legendary rapport that he had with his fans.

If you are a fan of Liberace then you will no doubt be buying this no matter what my opinion of it is.  And you know what?  I can't blame you for that one little bit.  For fans of the man himself and of his music, this is an essential purchase.  I had to admit though, if you're not a fan then I'm not really sure how much enjoyment you'll get out of it.  Give it a go though, Tony Palmer is renowned for his subtle and incisive documentaries and it's no different here.

Posted by Pat Scattergood at 13:07