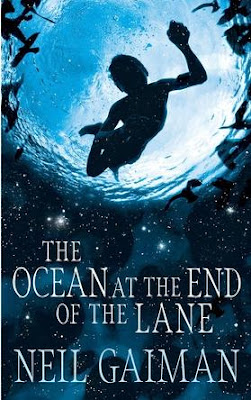 THE OCEAN AT THE END OF THE LANE is a fable that reshapes modern fantasy: moving, terrifying and elegiac - as pure as a dream, as delicate as a butterfly's wing, as dangerous as a knife in the dark - from storytelling genius Neil Gaiman.

It began for our narrator forty years ago when the family lodger stole their car and committed suicide in it, stirring up ancient powers best left undisturbed. Dark creatures from beyond this world are on the loose, and it will take everything our narrator has just to stay alive: there is primal horror here, and menace unleashed - within his family and from the forces that have gathered to destroy it.

His only defence is three women, on a farm at the end of the lane. The youngest of them claims that her duckpond is an ocean. The oldest can remember the Big Bang.

I don’t think it came as a surprise to anyone that knows me that I requested that this book be pre-ordered as one of my birthday presents. I was so excited that I even excitedly arrived home on the 18th June fully expecting to find the book and begin reading it immediately…. Unfortunately Pat had accidentally had it sent to his Mother’s house so I had to wait a few days!

I had high expectations from the beginning after reading scores of reviews that pointed towards this book being as thought provoking as Neil Gaiman’s renowned novel American Gods.

As always, with Neil’s words I found myself being pulled from my cosy bed into the main characters world from the very first page, with a wonderful rhythm to the book that kept it flowing and captivated my attention throughout… so much so that I’m certain my lovely fiancé got ignored on several occasions, and even possibly shushed!

Now I know there are reviews out there that will provide a summary of the book but well I don’t see the point in that, the synopsis available is already the best you can get, it was written by the author after all. If you want more… well then read the book!

Suffice to say you will be taken on a wonderful ride through childhood innocence, death, fear, love, magic, monsters, courage and the universe, to name a few things. And you will feel just as the character feels and see his world through his eyes, the good and the bad.

The thing I love about Neil’s work, which as expected he delivered by the bucket load with this book, is his ability to provoke a multitude of reactions. Whilst his work clearly conveys particular messages, in reality the underlying messages are only the readers interpretation of his words. That is not to say that any one person’s interpretation is right or wrong, simply that his writing style is such that it causes the reader to question many things in response. I came away questioning the cyclic nature of life and the human need to feel validated.

I was left feeling that childlike wonder at what could be out there in the universe and questioning reality. Let’s face it, who wouldn’t love a book that makes them feel like a child again, if only momentarily!

Posted by Pat Scattergood at 15:13