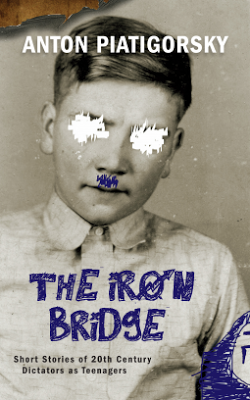 The Iron Bridge delivers an inspired inquiry into the early lives of the 20th century's most notorious tyrants. Anton Piatigorsky pushes at the boundaries of the unexpected as he breathes fictionalized life into the adolescents who would grow up to become the most brutal dictators the world has ever known.

We discover a teenaged Mao Tse-Tung refusing an arranged marriage; Idi Amin cooking for the British Army; Stalin living in a seminary; and a melodramatic young Adolf Hitler dreaming of vast architectural achievements. Pol Pot and Rafael Trujillo are also subjects of separate stories. Piatigorsky explores moments that are nothing more than vague incidents in the biographies of these men, expanding mere footnotes into entire realities. The Iron Bridge, completely imagined yet captivatingly real, captures those crucial instants in time that may well have helped to deliver some of the most infamous leaders in history.

On paper this book has all the ingredients for being a very good and interesting take on some of the most infamous people in history.

Piatigorsky has crafted a series of stories that should, in theory, absolutely grip the reader yet for some reason they just don't gel as much as they should do.  I'm not sure why that is because the writing is very well done and wonderfully descriptive.

There are some good moments in this anthology however and some of the stories do read as a really unique way of looking at some of the most infamous dictators the world has ever known.  The best way I can think of to describe this book is that why it's not great, it's not bad either.

After I read this book, I have to admit that I did enjoy it for the most part and it has enough of a hook to get the reader massively interested in picking up this book.  I'm not going to lie and say it's an essential purchase because it's not but it is very interesting so give it a look, it's well worth giving it that at least.