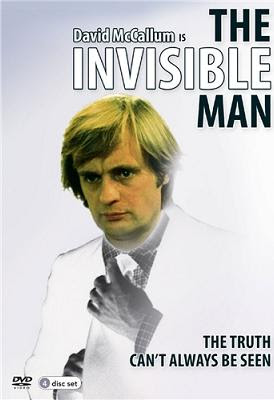 Starring David McCallum, hot off his cult-starring role in the TV classic The Man from Uncle,
this hit 1970s series launched with a feature length pilot followed by twelve exciting episodes,
all of which are featured here.

McCallum is Daniel Westin, an employee of the Klae Corporation working on experiments in
molecular disintegration with his wife Kate (Melinda Fee). When Westin discovers a method of rendering animals and then himself invisible, the threat of this discovery's abuse leads him to destroy the equipment, becoming permanently invisible in the process. While Westin seeks
to restore his visibility, he is assigned the codename Klae Resource and is put out to tender for highly secret, specialised missions.

From uncovering corruption in a small town to exposing political hijinks on a national scale;
from saving defecting scientists to protecting aging dictators undercover; from rescuing kidnap victims to uncovering crime at the heart of the Klae Corporation, these are the adventures of the Klae Resource, a.k.a The Invisible Man.

The 1970's were a great time for science fiction fans with movies such as 'Star Wars' and television series such as 'Battlestar Galactica' bursting in to our geeky little world.  This one is a bit more Earth bound as a scientist searches for a cure after using an invisibility serum on himself.

While it may sound a little hokey in places, this cult classic series really stands up to the test of time.  The acting is very subtle and the stories deal with some really heavy duty subjects but with a gentle touch instead of being heavy handed.

The cast is absolutely superb.  David McCallum went in to making this series after being in the classic 'The Man From U.N.C.L.E.' television series and he gives a brilliantly simple yet effective performance as Daniel Westin.  You'd expect a part such as this to be a bit melodramatic and over played yet McCallum gives an assured performance that really gives the series it's emotional core.

However, if the rest of the cast wasn't up to his standard the show would fall flat on it's face yet they more than live up to the standard set by McCallum.  The best of these is Belinda O. Fee as Daniel's wife Kate.  She takes the same subtle style set by McCallum and it really works next to his performance.  They really do come across as a married couple because their chemistry really makes you want to root for them.

It's the setting of the series that gives it the main strength.  The taut, claustrophobic atmosphere of the series really lends itself well to the feeling of dread and hopelessness that the character sometimes feels while trying to find the cure for his condition.  There are some rather downbeat moments, especially in the ending couple of episodes, that really fit in to the feel of the show.  It comes across as a stage play in places because of the sets and how it's been filmed but I mean that in a really good way.  It gives it a bit of a personal edge that makes you want to get more involved in the story itself.

Special effects wise, while they won't make you think wow these days, are still impressive considering this series is nearly 40 years old.  The way they use the invisible effects so carefully really makes it a series worth watching.

The only downer I have about this release is the lack of special features.  I would have loved to have seen something about the cast or about the effects but that's a small complaint considering the show is nearly 40 years old.

This is definitely a cult classic that is well worth picking up.  The taut settings and the claustrophobic feel of the show really raises it a lot higher quality wise than similar shows of the era.  Add in the subtle performances by the main cast and you have a gripping science fiction telling with a lot of drama mixed in.  Well worth a look.

Posted by Pat Scattergood at 03:43